Appreciating NYC's drinking past (and present) 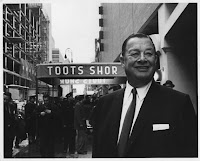 I enjoyed Off the Presses author Robert Simonson's article in the Sun yesterday titled "Looking at New York's Liquid Past." Here's his look at Times Square:

Walk to Broadway and down two blocks south to the Crossroads of the World. Unsurprisingly, a lot of drinking history occurred at this intersection. On the southeast corner of Seventh Avenue and 42nd Street, you can still see the Mansard-roofed beauty that once was the Knickerbocker Hotel. The bar was so favored a watering hole of uptown swells in the first two decades of the 20th century that it was called the 42nd Street Country Club. (It was also the original home of Parrish's "Old King Cole" oil painting.) Its main importance in cocktail history, though, lies in the once-prevalent claim that its head bartender, Martini di Arma di Taggia, invented the martini in 1912. This is balderdash, since mentions of the drink had been appearing in print for decades prior to that. But give ol' di Taggia a quick salute, anyway.

Directly opposite Broadway was the Hotel Metropole, another popular way station for actors, politicians, and the like. Its house cocktail was the Metropolitan, which is basically a Manhattan, but with brandy standing in for the rye. It hasn't retained the fame the Manhattan has but is still a damned decent drink.

He also provides some nice details about current haunts such as the Algonquin and King Cole Bar.
Posted by Grieve at 12:49 PM