Friday night in Tompkins Square Park: Unity and a sitdown (and several arrests)

Details are sketchy. Here's what Mrs. Grieve saw (a little before 9). She was traveling solo at the time:

Cop cars racing down Avenue A. People hovering. Some kind of disturbance. Cops seemed over-anxious. A skinny kid picked up a chair and threatened to throw it. The cops said to put it down. He threw it anyway. Cops went ballistic. Chased after him. A crowd followed. A few minutes after, a sit down occured in front of a cop car. Lots of people gathered around in support and just watching. Cops stood emotionless as the crowd called for them to quit, commit suicide . . . and called them Nazis. 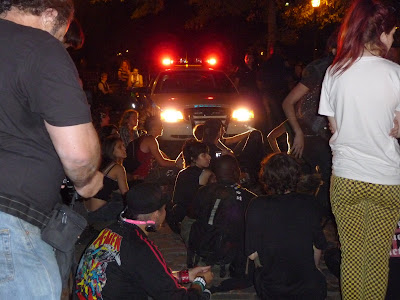 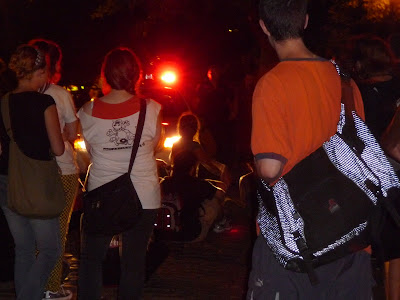 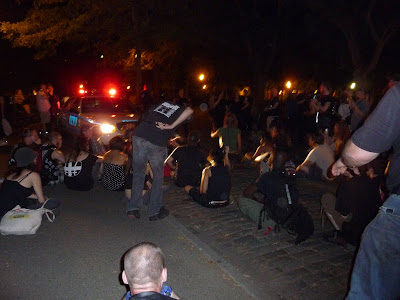 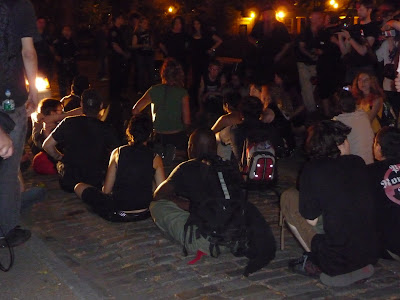 [Update: Bob Arihood has more details and photos at Neither More Nor Less. In short, he reports on his site: After the Donut Social, several protestors, including Leftover Crack singer Scott Sturgeon, traveled to Tompkins Square Park "to continue the music with a more intimate acoustic version of the donut concert. For some reason -- we did hear that the arrest may have had something to do with Sturgeon having hurled donuts at the cops earlier at the Donut Social -- police broke-up the gathering and arrested Sturgeon at 8:45 pm . Members of the gathering attempted to prevent the police cruiser carrying Sturgeon from leaving the park. The mini-riot that ensued resulted in 3 more individuals being arrested." ]
Posted by Grieve at 9:18 PM

By the time we left dinner about 10 minutes later the whole thing had died down and we saw no sign of any disturbance.

Thanks for the note, Jill. I managed to miss the whole thing. I was walking near 7th and B when I saw 4-5 police cars leave the Park. Figured it was just some sort of excessive show of force on a Friday night...

What a bunch of ridiculous losers. Too bad more of them weren't locked up.

These people aren't fucking up the vibe here--you guys are. This was the vibe before you --the yunnies, yuppies, Carrie Bradshaw wannabes--started to move-in. And the only negative attitude in the EV is amongst you fratboys, yuppies, and douchebags to those who have made EV EV.

How in the world can protestors fuck up your relationship with the cops and help make you feel safer? And whatever would make you think they don't live here? Do you not realize that these are the very same cops that beat up dozens and dozens of people, bystanders, protestors, pedestrians for no reason and without cause? These are the same cops that for years sat in "unmarked" cars on the streets with photos of residents of this neighborhood, taking notes and photos of everybody as they enjoyed themselves in the park? A local elected official once told me that when they don't know what to do with the cops who can't fit in anywhere else, or who are failing, they stick them in the 9th precinct?

What makes you think the cops around here will ever make your life safe? Get to know them, they aren't on your side, you are the enemy. Move to the Upper East Side if you would like to live in your little slice of friendly heaven with friendly cops, wealthy neighbors who enjoy the status quo, and have a nice, big park that doesn't close at sundown or disallow permits to play music after 6pm. Also, the rents are cheaper, it would suit you just fine. Please leave.