Looking at a review of Candace Bushnell's new book 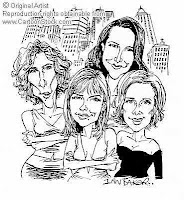 Read Doree Shafrir's review of One Fifth Avenue, the latest from Candace Bushnell, in the Observer.

[T]he new breed of youngsters intent on highlighting the hypocrisy of their elders is meaner and, well, snarkier than their forebears, Ms. Bushnell implies. Their number is led by a smarmy 20-something named Thayer Core, who lives in a tiny East Village walk-up and yet feels qualified to lob his verbal grenades at the rest of Manhattan (including several residents of One Fifth). Thayer is a despicable character, and it’s not a stretch to imagine that she was personally offended by things written about her on Gawker (where, full disclosure, I used to work). And yet, Ms. Bushnell’s caricature of the Web site and its writers falls victim to the very same snarky, self-satisfied kind of writing she accuses the new generation of perpetuating.

Can't wait for the series!

Email ThisBlogThis!Share to TwitterShare to FacebookShare to Pinterest
Labels: books that we will never read, Candace Bushnell, New York Observer, One Fifth Avenue, Sex and the City

Can't wait for her to write a book on One Third (turd)Avenue , and then live there.

Why would anybody waste one moment reading that crap when there are so many books to read and not nearly enough hours in a lifetime to do so. Not to mention the time that must be spent watching TV.