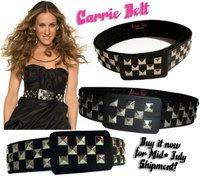 Horrors! Writes Sheila at Gawker: There's no satisfying way to explain the party, other than a PR clusterfuck/fuckup. However, maybe people are getting a little tired of the franchise after a six-year TV run, one of the most-hyped movies of the year, and a cultural reach that, on some days, seems to have infected the entire city with luxury brand names and bus tours. What does this say about the sequel? We're guessing nothing good. Sometimes you just have to get the shotgun and take the old mare out behind the barn.

Here's a feature on the Sex and the City Tour from April 2004 by Norwegian journalist Henrik Pryser Libell: