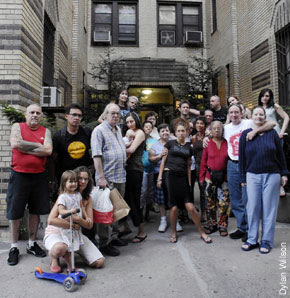 Residents at 176 E. Third Street have been offered up to $125,000 apiece to move out of their rent-stabilized apartments. They declined. As the Post notes:

The residents charge that the buyout bid by Icon Realty Management, owned by Terrence Lowenberg and Todd Cohen, would destroy the building's sense of community.
"They offered me $120,000," said Carolyn Chamberlain, 65, a secretary who pays $400 for her two-bedroom apartment in the six-story, prewar building.
"I told them I would only be interested if it was middle-six-figure offer. It's outright harassment," she said.
Alexander Camu, a bartender, said he turned down a $125,000 offer.
"I moved here when the neighborhood was crap," he said. "I turned down the offer because I'm being paid to leave my life."

Bob Arihood has been covering this story at Neither More Nor Less. Read his coverage here.
Posted by Grieve at 7:00 AM

"I told them I would only be interested if it was middle-six-figure offer. It's outright harassment"

So, for about another $25,000 more, it'll no longer be harassment? They're no different than the developers who are pushing them out; they are all driven by greed.

The tenants are right. If you calculate in inflation, and the need to get a new place somewhere elese, if they took the $125,000 they would at best break even, depending on how high inflation is.

Re the above comment, if they held out for another $25,000 and then leave, great. They have an asset, in their leases, and they should negotiate the best possible deal for it.

Yet, how is offering someone $125k harassment? I wish my landlord would harass me that way.

I am a current tenant of this building and I have never been treated so badly by a management company. I would not recommend ANYONE to move into ANY of the ICON buildings! They are heartless bastards.