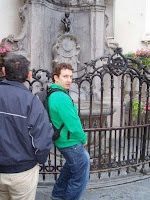 Columbia University's New Media Newsroom site has a handy-dandy interactive map showing 311 reports of urinating in public in Manhattan since the beginning of 2008 by zip code.

Admittedly, information about where we pee illegally may be subject to reporting bias: residents of tony Gramercy, for instance, may be quicker to complain to 311 than those in the neighboring (and more transient) Lower East Side, which may explain some of the difference captured in the DoITT's reports. Indeed, neighborhoods that rank the highest in complaints may even try to claim superior citizenly virtue, for being so quick to notify the city of their misbehaving brethren. This isn't the last word in the Great Manhattan Inter-Neighborhood Piss-off. But until then, let's let the numbers tell their own story.

There's only one 311 call for the 10009 zip code of the East Village because they're peeing in the elevators, instead, where no one can see them and report them. I guess them NYU kids are smarter than the Columbia kids.

So who's going to do the follow-up on 311 calls about people defecating outside?

I hate losing a pissing contest.