A few weeks ago, we passed along word that the former A. Fontana Shoe Repair at 159 Second Ave. and 10th Street was becoming a vegan ice cream joint. Well, the front windows have been papered over for weeks. And then! A sign just appeared, as this photo from our tipster shows: 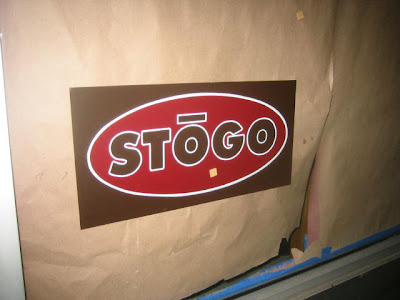 Stogo? As in consultant Malcolm Stogo of the Ice Cream University?

Whether this place has anything to do with Stogo, we'll share his bio anyway -- because it's delicious! (heh):

For the last 25 years, Malcolm Stogo has been in the forefront in developing today's ice cream concepts leap years ahead of the industry. He is the author of Ice Cream & Frozen Desserts, co-author of Ice Cream Cakes, and author of a new book titled How To Succeed in the Incredible Ice Cream Business. He is President of Malcolm Stogo Associates, an international ice cream consulting firm, as well as founder of Ice Cream University, a seminar series and publishing company on ice cream production, and marketing and publisher of Batch Freezer News and Ice Cream Store News, two quarterly newsletters on everything one needs to know about ice cream production and marketing. In the 1980's, he co-owned Ice Cream Extravaganza (New York), the largest single frozen dessert operation ($1,500,000 in sales). He also invented the chocolate dipped waffle cone now being produced and sold all over the world.

I can't get past Ice Cream University. ICU? Go Defibrillators! (And do they have a football team?)
Posted by Grieve at 8:55 AM

Vegan Ice Cream? What is this revenge for all the leather work done there in the past 25 years. That's my new manta "Vegan Ice Cream". Now where is a good place to fix my shoes.

i want to go to Ice Cream U.

as for this stogo, with that weird accent on the O, i have a feeling it's something scandinavian. maybe icelandic.

Yeah, it's likely Scandinavian, but I just wanted to run the Ice Cream University stuff!

Hey anonymous, David's on 7th Street between First and Second Ave. is a great shoe place...I also like John's on Irving Place between 15th and 16th.