"No Reservations" at Sophie's 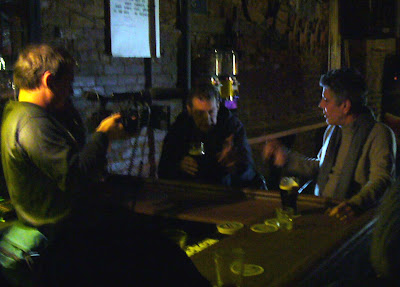 A tipster tells me that globetrotting chef Anthony Bourdain filmed a segment of his show "No Reservations" at Sophie's this past weekend. He was joined by Nick Tosches to discuss great old haunts of NYC. After Bourdain and the film crew left, Tosches reportedly stuck around for more beers and some pool. The episode filmed at Sophie's will air in February.

Well, this is all good for Sophie's of course, but I keep thinking about what Jeremiah wrote in his post on the closing of the Holland:

This just after Anthony Bourdain, mourning the loss of Siberia, praised the Holland, which he called: "A classic old-man bar." He also hailed the Distinguished Wakamba Lounge, a former after-work haunt of mine, and now I'm worried. What if Bourdain has reaper powers?

Oh geez... I lived across the street at 508 E 5th for three years in the late 80's. They were the only signs of life on the block the whole time. EVG & JM, you guys must exorcise that killer hex from yourselves!

Jeremiah is the one with the power!

Anyway, Sophie's is doing well, from what I can tell...

I got no problem with Nick Tosches making the rounds but shit, man, why not just send Diners, Drive-ins and Dives into the place and put the lid on the coffin??

Sophie's is doing great! Have no fear.
Signed,
one of her Bartenders.