"Partying Like You Never Graduated in New York, New York"

Superdive is decked out for the holidays... 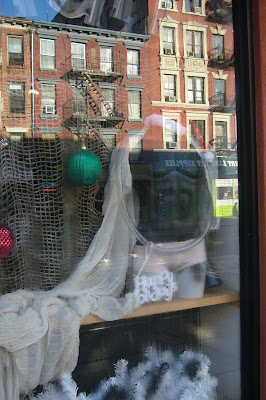 ... and there's a new review of the place on something called trazzler.com: Partying Like You Never Graduated in New York, New York
There was this place in college. You remember it. A house devoted to the pursuits of alcohol-fueled debauchery, where the couch was always damp, where the basement-level parties were like classes in beer-bong technique. A shame the city condemned it. Your beer pong game never recovered. Enter Superdive, the next generation party house, where the kegs come tableside. That’s right: keg service—from a list of 750 beers (the Keg Master will need advance notice for more eclectic choices). The bar looks like the offspring of a ski lodge and a fraternity house. Claim a booth with your party people, order some suds, grab a plastic cup, and release your inner-undergrad. Once you’ve plugged your iPod into Superdive’s sound system, or jumped behind the bar to mix your own Mind Erasers, you’ll understand what could happen here: anything. Keg-stands are “not encouraged.” Which the same as saying they aren’t discouraged.

this could describe the entire neighborhood.

There actually is or was a place like this on Rivington Street called "Welcome to the Johnsons".

The different is that "Welcome to the Johnsons" was deliberatly designed to be a kitschy theme bar, to stand out from the rest of the area. Of course now it no longer stands out, if it still exists (I've not been on that block in two years), now that actual frat bars have come to the neighborhood.

Hey Prodigal Son. The Johnsons is still there... Haven't been there for years myself...