The photo the city doesn't want you to see, apparently

During the weekend, I was walking along the Bowery and decided to take a rather innocuous photo of this worker while standing on the sidewalk... Not even something that I had planned on using. Just took the shot. 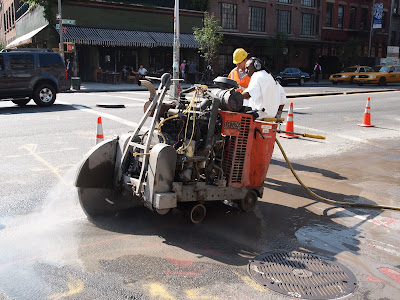 Meanwhile, the worker's supervisor standing nearby shoos me away... We exchanged words for upwards of three long minutes. We couldn't really hear each other because of the noise from the machine. But! He told me it was against the law to take photos of city workers. He told me that I needed a permit. Anyway, it was all rather amusing. Made for a great brunch scene at Gemma!
Posted by Grieve at 6:43 AM