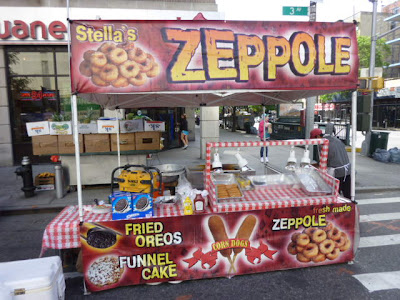 Concluding that the vast majority of New York City street fairs are bland and repetitive, and in need of wholesale changes, the Center for an Urban Future today published a report that features ideas for improving these staples of summer from two dozen innovative New Yorkers, including the founders of successful markets like the New York City Greenmarket, Union Square Holiday Market, Brooklyn Flea and Chelsea Market.

The study, titled “New Visions for New York Street Fairs,” starts from the premise that the city’s current system of street fairs desperately need a makeover. It argues that large numbers of New Yorkers are dissatisfied with street fairs for a variety of reasons: there are so many of them that they quickly blend together (there were 321 of them in 2009); a majority of the vendors sell the same bland merchandise, such as tube socks, sunglasses and gyros; a handful of neighborhoods are inundated by the fairs, with a new one popping up almost every week; and with nearly a dozen street fairs on some weekends, the multiple street closures make driving or taking a cab through the city a nightmare. The study seeks to jumpstart a discussion about how to make these public events less generic, more interesting and better reflective of what’s unique about New York.

“New York’s street fairs have been a disappointment for too long,” says Jonathan Bowles, director of the Center for an Urban Future, a Manhattan-based think tank. “It’s time to throw out the cookie-cutter approach and create street fairs that better reflect this incredibly unique and diverse city. There’s no reason to see the same vendors selling tube socks and gyros at almost every fair when New York has so many one-of-a-kind entrepreneurs and artists.”

A PDF of the full report is available here (PDF)
Posted by Grieve at 1:00 PM

but...what will you feature in your blog, if these tube socks, zeppoles, mozzarepas, vendors disappear?

street fairs used to be about local neighborhood businesses bringing out their wares onto the street to sell for that fair, (much like the l.e.s. fair, stone street festival, housing works fair, and oyster fest on 4th st.). how about reverting to that?

I always feel a faint sense of gladness whenever I see a street fair. I dunno, I guess I like the idea of streets closed to traffic and people walking leisurely on them. But yeah, the actual content of these fairs is boring and repetitive. I mean sausage and peppers, zeppoles and grilled corn on the cob get old fast.

One contributing factor to the non-uniqueness of the vendors could be price. I would like to participate in these fairs, but I just can't afford it. Many other small, independent artists and craft-persons may feel the same way. Bloomberg and the city raise the fees on these things so high, only a corporate or large concession can afford it.

I could not agree more. How is it that in an international city like New York the main things on offer at those pain in the ass, unchanging avenue fairs (they're almost never held on streets any more) are the exact same food stalls, stale spices, Sham-wows, cheap clothes from India, massage chairs and "Egyptian cotton" sheets? Here's a hot flash for fair promoters - crepes and arepas were novel when the stands were added about 15 years ago. Now - forget it. Street fairs used to consist of the people who actually LIVED on the street in question bringing out tables and setting them up with antiques, homemade food or items they owned and wanted to sell. Each one was unique and interesting in its own way, but the problem was, they didn't make the city a lot of money, if any. These bloated replications of each other put lots of dough in city coffers, so I don't think they'll be changing the formula any time soon. Besides, tourists love 'em, and we all know they're far more important to City Hall than people who actually live here.

Once this tube sock vendors killed the 9th Ave food festival I haven't gone to any. Local vendors should get free acess, they're already paying their taxes and the tube socks should pay a premium.

Why cant they all be like the Hester Street Fair or the Brooklyn Flea?

all street fairs should be like the 5th avenue street fair in park slope.

@Goggla How much does it cost to be a vendor?

Fees depend on the fair and who is running them. Cheaper ones are around $100 per day and at the other end, there are things like the Union Square Christmas market, which can ask upwards of $20K (for the month).

Street fairs would be better if they sold beer.