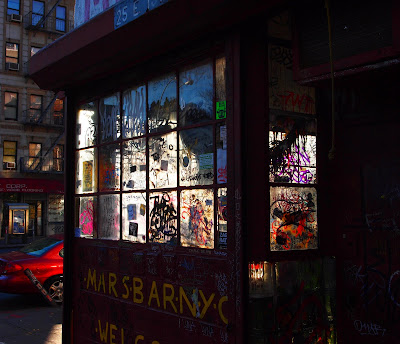 So, the Local East Village via Curbed is reporting that "BFC Partners, builders of luxury condos like Noho's 48 Bond and Downtown Brooklyn's Toren, plans to renovate part of [lower Second Avenue] and add new market-rate housing. This will cause the temporary closure of Mars Bar and its neighboring businesses."

From the Local East Village:

“They won’t choke me,” Hank Penza, the longtime owner of Mars Bar, said of the developers, adding, “I didn’t get off the boat yesterday with a pound of spaghetti in my hand.”

Mr. Penza said that he wasn’t too concerned about the lost revenue, noting that he’ll ultimately get a space that’s three to four times the size. The developers, he said, “are good people” — and that seemed enough for him.

BFC goes before CB3 tomorrow night with its plans, including combining the buildings along Second Avenue near First Street — "perhaps bringing the height all the way up to 12 stories."

So many questions. To be continued....

Eater sums it up nicely:

If a current plan to build low income housing on a parcel of land on lower 2nd Avenue is approved by Community Board 3, the borough president, and the City Council, it will lead to the two year shuttering and eventual rebuilding of famed East Village dive Mars Bar.

Email ThisBlogThis!Share to TwitterShare to FacebookShare to Pinterest
Labels: Mars Bar, the apocalypse

I took the 'space 3-4 times the size' line to mean that they'd offer him a larger store in the building, not that they'd be moving. Maybe I'm wrong.

Also looks like you're going to need a reshoot on your facebook profile pic. Maybe the orange Porsche SUV that's in the neighborhood will park in front of those sweet new condos.

OK, I've calmed down a little bit. A lot of hoops to go through before this is approved...

The approval process takes at least 7 months, so they'll probably be open 'till the summer. I would expect a big party. A bar 3 or 4 times bigger won't be the same.

I want to comment on this rationally, but I'm too busy panicking.

This is really bad news. First Ruby's and Cha Cha's out in Coney Island and now this. There's no way you can re-do or make a bigger Mars Bar. Fuck.

If this comes to pass it will literally be the worst thing that ever happened.

Goddammit, we just can't win. Just... ARGH! There are no words.

I went there when it was brand-spanking new - late 80s maybe? Everything changes.

...but that poster is right. The LAST friggin' think yuppies want is a divey dive bar with "artists" and "other street vermin" on their doorstep. And if they do decide to "adopt" Mars bar as theirs, well it WON'T BE MARS BAR THEN WILL IT?

If this goes through and Mars bar closes, then kishen tookes, as they used to say on the LES. "Kiss my ass."

I don't believe that the Mars Bar will be offered a spanking new and larger space for the same money--I don't buy it.

I'm confused by this. The top part says that they will build market rate housing and then the Eater quote says something about low income housing. Which is it?

"Low-income housing" MY ASS! Isn't that what they claimed they were going to do with CB's space and then they put that overpriced douchebag fashion store there?

Sounds just like what the owner of Cedar Tavern said 5 years ago. We will be back. Better than ever, unless of course it is worth more money to me to disappear.

i know this is trivial, but fyi that's a nissan 350z, no where near the price of a porsche, you could be a bartender and own that car, well if you worked at the right bar, (right being a subjective word of course)

I feel like vomiting. This is a national disaster!

Beware of the "move-out-then-you-can-move-back-in" deal.
Several years ago Prana food store on 1st ave went for that one and was gone forever. Never got the full story of that.

BFC! The worse! They are responsible for Eastville Gardens which is one of the worse developments in LOISADA. First of all they took the garden there. Secondly, the little sliver of a garden that was left on Avenue C is supposed to be for the public, it was apparently part of the deal, so why isn't it open? Thirdly I heard that they weren't doing well and that they were trying to dump Eastville Gardens. That was the start of turning Avenue C into the shit- show that it now is.
What can we do? How do we go about protesting?

I've been sad about this all night...tempted to just quit my job and hang out on a bar stool every day until the stool gets ripped out from under me, like the proverbial rug that has already upset my feelings towards this neighborhood.

Yeah but the owner of the Mars Bar doesn't seem to mind and after all it's his place right?

It's true that the places and people we see as allies don't necessarily see things the way we do. It's a heartbreaker. Your suddenly shocked into the realization that the things you've loved for such a long time don't really love you.

Cookiepuss- We're only in it for the money.