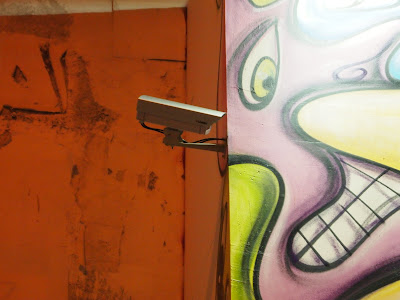 Apparently those surveillance cameras on the Deitch Wall aren't enough. Billy Leroy at Billy's Antiques sends along word that Goldman Properties have hired 24/7 security guards to watch over the often-bombed mural on Houston and The Bowery.

Updated at 1:45: Billy reports back... turns out Goldman did hire security, though they were only for until the paint on Scharf's work from Saturday night dried...

maybe Deitch and Tony Goldman can enclose this wall in impenetrable, bullet-proof glass, surrounded by lasers that release nerve gas when tripped.

And that's when it's no longer street art, for sure.

are you effin' kidding me?

I posted a follow up to this on my site... http://www.freshpaintnyc.blogspot.com

People have a right to protect their property. What is wrong with you people, are you so contrarian that you will even poo poo others who stand up for their own property. At least they are standing up for something.

this is what Goldman does with his Wynwood Walls in Florida. from The Biscayne Times:

"The murals at 'Wynwood Walls' are not graffiti. They are paintings, and Goldman has hired 24-hour security to make sure no one defaces them. As [artist] BooksIIII points out: 'Look, they’ve got tended grass and lighting and whatnot. Our stuff is still unpoliced; It’s just out there on the street.'"

This really is more of an installation than "street art" anyway. If someone puts that much time and effort into something the beauty of which can be destroyed in 5 minutes (and, not to mention, someone else gives up a space like that for art instead of incredibly valuable advertising), surveil away I say.

Are the guards armed?

who decides what is art?