Report: Veselka may not renew lease for First Avenue kiosk 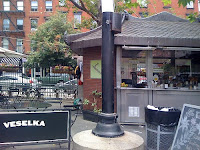 Crain's is reporting that the Veselka kiosk at First Street and First Avenue may close this summer. Per the article:

The city’s Parks Department put out a request for proposals Tuesday to operate the kiosk, which for the past five years has been run by Tom Birchard, who owns the nearby 56-year-old Eastern European eatery, Veselka.

Mr. Birchard says he is considering the RFP, but a new requirement to install a bathroom in the park for the restaurant’s workers is a major concern. There is no existing plumbing in the park, so the installation could be very costly, he said.

Regardless, there will be plenty of borscht nearby: A new Veselka outpost is opening on East First Street near the Bowery later this year.

It would suck if this closed because I like stopping by on my way to/from the F train and the people who work inside have always seemed like good people. Why would the Parks Dep't be required to build a bathroom for Veselka workers but not for workers at some other type of kiosk? Is it a food service vs. no food issue?

Isn't that what Port-A-Potties are for?

I smell a Shake Shack on the horizon.

They could pay for the construction/plumbing with the receipts from lunch at all their locations today.

So...where have the employees been going? If there is no plumbing, how do they wash their hands?

That is a substantial rent increase, but why NOW, why not when the kiosk was built? it galls me that this park is privatized - sure it was a mess in the crack 80's but why do we have to have every plot of public land fenced - you have a beautiful summer evening and OUR PARK is locked up tight.

Bummer. I take my dog there in the summer, because they sell dog biscuits and are super nice and give my dog extra water without me asking. Plus, I get into weird and entertaining discussions with people hanging out in First Street Park.

I was thinking the same thing...

@Goggla and EV Grieve: (From Crain's) “The Parks Department communicated with the Health Department and reached an understanding. And we got permission to use the facilities of the administrative offices of the Second Avenue Deli across the street,” said Mr. Birchard.

So if you have to go across the street, it makes you wonder how often hands are washed there while preparing food.

There is a nice kitchen with hot and cold running water in the kiosk. The kiosk was designed and built by the architects (CTA) who have designed the new Lower Eastside Girls Club on Avenue D. The idea for a cafe came from the community. It has been a delightful addition to what was once a dismal corner. Veselka continued the community spirit.

Lyn, I agree but why does the park have to be closed when the vendor is closed? Someone made that decision for the rest of us, didn't they.

Nooooooo! They have the best egg and cheese sandwich in the city and it's a lovely little oasis in which to breakfast or feed and water the tykes on the way to the playground. It would be a real loss to my family if they left -- we're every weekend day regulars in the warmer months.

And as for the haters talking about privatization, whatever. This is a nice, affordable, responsible and venerable local business with deep roots in the neighborhood, not some hotshot food auteur's upscale mini-chain. It adds a lot to that corner. And what are parks for but for people to *do things in*, like eat a sandwich in them, linger over a coffee or a newspaper in them, meet friends for breakfast in them? Would you rather a pristine little patch of concrete that nobody ever used for anything?

Oh for gods sake people!
They are not going to tear it down!

They built it for food vendors; and there has always been food vendors; most of them a lot better than Veselka (and I LOVE Veselka)
If Veselka leaves, someone else will move in.