There's a special event Sunday at the Bowery Poetry Club: It's the 80th birthday for classical composer/multiinstrumentalist/author David Amran.

Amram first performed at the original Five Spot with the Charles Mingus Quartet in 1956. He began the first poetry readings with musical accompaniment back in the 1950s, performing with Jack Kerouac and other noted poets. He wrote the music for "Pull My Daisy," along with performing in the film. Amran has also worked with Bob Dylan, Miles Davis, Dizzy Gillespie, Langston Hughes and Nina Simone.

From left: Amran, Allen Ginsberg and Jack Kerouac circa 1959... 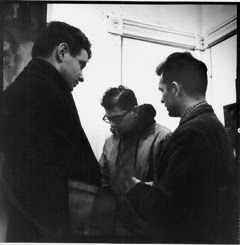 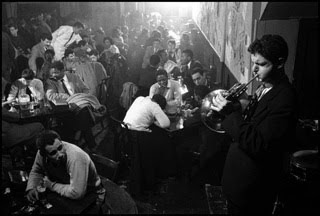 A few friends at a diner... 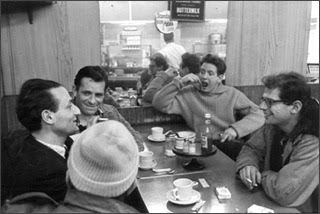 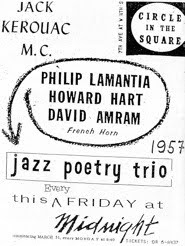 Amram will be performing with his quartet, who will be joined by his children, Alana, Adira and Adam, along with other guests. Actor John Ventimiglia of "The Sopranos" will be reading Kerouac with Amram's accompaniment. Admission is $10. The show starts at 8. Find more info here.

[Thanks to Cary Abrams, who's presenting the event, for providing the photos here.]
Posted by Grieve at 6:41 AM

David Amram is also a virtuoso French horn player. I had the opportunity to hear him play the horn back in the 70's. I love the French horn!

Amram tells some great stories in his book "Upbeat: Nine Lives of a Musical cat." This guy has been a witness to a whole lot of history and made a whole lot of music with a wide assortment of people in his 80 years. Happy 80th Mr. Amram...

1978 or so....Winnipeg Folk Festival...early morning workshop with John Prine, Steve Goodman and others....about 40 audience members sitting out in the early mornin' dew....everybody sleepy/hung/etc..I swear Prine DID fall asleep accompanying somebody....across the field comes what seems to actually be a whirling dirvish....small scarf and WILD hair blowin' in the wind....hits the stage and intros himself as Amram from NYC....breaks out the French Horn and WAKES EVERYBODY UP....even Prine....longer may you run David...

The Amram Family rocks this town!