From mice to leaks, First Houses are showing their age

City Limits has a lengthy piece in its new issue on First Houses, the first public housing complex in the United States here on East Third Street between First Avenue and Avenue A. 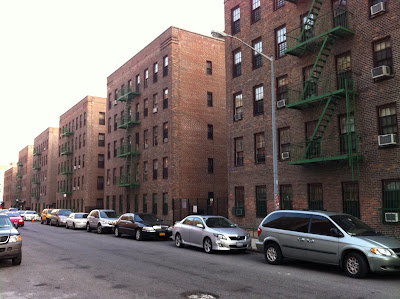 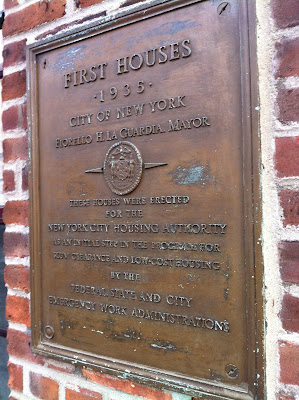 Things aren't going so well inside the historic location. There are stories of mice eating their way through the worn floorboards and a resident who has been battling the New York City Housing Authority (NYCHA) for 15 years over a persistent leak.

"The feeling among some residents in First Houses falls somewhere between pride and worry about the historic landmark that they call home. Lashawna Kelly, who lives in another of the eight buildings comprising First Houses, is fighting her own battles against leaks and cheap, falling doors."

Read the whole article here.
Posted by Grieve at 6:50 AM

I like the guy who blasts old soul music in his first floor apartment with the windows open every day and the liquor bottles on the coffee table. (Glad I live nowhere near him.)

Me too, Larry. I hear the music half a block away. Always expect to see a party. Often, though, he's by himself.

It is a long running party in that apartment. Years.

I pass that window all the time too. Makes me want to climb in a share a drink.

Funny - that guy was the first thing I thought of when I saw this post.

I clicked on the comments specifically to say the same thing that everyone else already has.
Granted... I'm not sure I would like to live right above the guy 24/7. But I sure get a good vibe when I walk by and hear some groovin' old tunes coming out of his window.

I actually had a drink with that guy once and he was pretty nice. Told us to stop by whenever. Last fall I was walking by, expecting his apartment to be empty as usual (besides the liquor bottles and music) but he had three ladies sitting on his couch.

lol, I've always wondered about that party guy and had no idea he was so well-known.

This guy is screaming for an interview.

Flash mod party at The Old Soul Guy's place! Be there!

@Larry - I walked by earlier and, sure enough, the booze was ready to go!

I'm glad that so many people mentioned this guy. I always do a little dance when I pass by his spot!