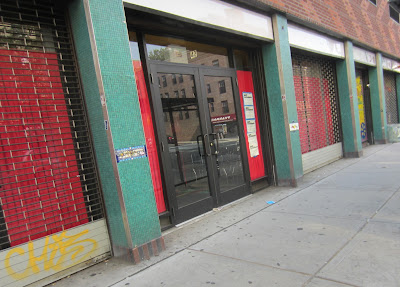 An EV Grieve reader sent along a link to a recent post on the Comic's Comic that provides some details on the Upright Citizens Brigade's East Village outpost on Avenue A. Sure has been quiet here of late. Workers even removed all the signs.

But! As Sean L. McCarthy reported:

UCB people told The Comic's Comic ... that they're "getting ready to open" UCB East, and I've already received word from some shows booking gigs there in September. The aim of UCB East is to provide a home for more stand-up and variety shows, thereby allowing the main UCB New York City theater in Chelsea to open up more primetime hours for improv and sketch.

So there's still time for residents to get outraged by something connected to this location.

Breaking: UCB will remove the 'Hot Chicks Room' sign!
Posted by Grieve at 6:50 AM

UCB East is a place to discover composting, the art and science of turning food and yard waste into a healthy soil amendment. Come for a fun and a chance to unravel the mysteries of "black gold" and pet our newest compost workers - 35 adorable "hot chicks!" Kidding! Looking forward to the opening.

Gee Standup kind of sucks
wish they would stick to the improv stuff
wonder if they are going to offer classes in EV spot?

for the east village to become a stnad-up comedy destination is like a nail in the coffin. how i wish this whole operation would just get the hell off ave b.

So, Ave A is the new Ave B? It used to be the other way around but nostalgia, as they say, ain't what it used to be.

First came complaints about cargo shorts and sandals. Next a stupid sign controversy and then an even stupider curtains controversy. Now having a comedy club with a decent reputation and cheap admission into a 99 seat theater on Avenue A is "like another nail in the coffin." For the love of god, please just ignore some of us and open your club already.

I am outraged that this place hasn't opened yet! Where are the rest of the angry East Villagers? It's time to mount a protest! I'll write a poem!

They don't teach classes at the other UCB location, they have a training center nearby.

I'm offended at the lack of signage!