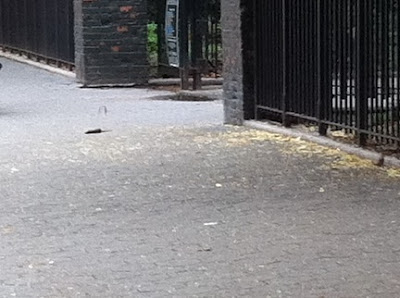 An EV Grieve reader asked city parks officials what they were doing about the rat overpopulation in Tompkins Square Park. Here is part of the response that the reader received via email:

1). Parks has removed the garbage bags from the rats.

2). All garbage bags, once removed from garbage drums, are taken off-site. Bags are not left overnight in the park.

3). Parks is working with a garbage bag distributer MINT-X and using their rat-resistant garbage bags in the park.

4). Parks are using rat snap traps inside plastic boxes to kill rats, without the use of posions.

5). Tompkins Square Park has a red tailed hawk that frequents the park regularly, so Parks does not use rat poison.

6). Parks has reached out to the organizations that feed the hungry and homeless in Tompkins Square Park to minimize littering of food in the park.

7). Park night Crew cleans every night to sweep up around garbage drums, removes food from the ground and in garden beds, and removed garbage bags from the park.

8). Undesirable plants and shrubs, that offer rats harbage have been reoved from the park.

9). Parks is continuing to use non-poisonous methods to reduce rat population in the park.

Per the reader: "I think they deserve some credit ... also, it shows that going through the 'proper channels' ocassionaly works!"

We also hear that 20 more of the snap traps are on the way... Plus, well, there's some talk that the deluge on Sunday may drown a few of the rats...

Bob Arihood notes that "Inside Edition" returned to film in the Park... and, once again, the rats didn't disappoint. Read his report here.
Posted by Grieve at 6:58 AM

Email ThisBlogThis!Share to TwitterShare to FacebookShare to Pinterest
Labels: rats, the TSP Ratstravaganza

This hurricane is gonna clear the rats out really quickly. However, they're not stupid and wont just die and float to the surface of the flooded streets. They're gonna find warm, dry places near the park, so if you live on Tompkins you'd better watch out.

Thanks for the link, Bucky. I missed their report.

They need to remove the bird. I pay city taxes so that I can have a park, not so that a bird can and rats can. How the hell are they gettting away with this.

Oh, I pay city taxes and much enjoy having a bird in the city park (a hawk bird, I mean, not those pigeon things), and I actually don't mind the rats that much, although I admit that it's best they be done in. But there are certainly ways to do that without poisoning the bird (and, perhaps, other local wildlife such as dogs and children).

It's not clear why Annie thinks that her tastes should be the determining factor, except that she pays city taxes. Well, so do I. Maybe she pays more? I don't know. If she does, maybe she thinks she can kill the hawk so she can enjoy her park. But isn't enough of the city already auctioned off to the highest bidder?