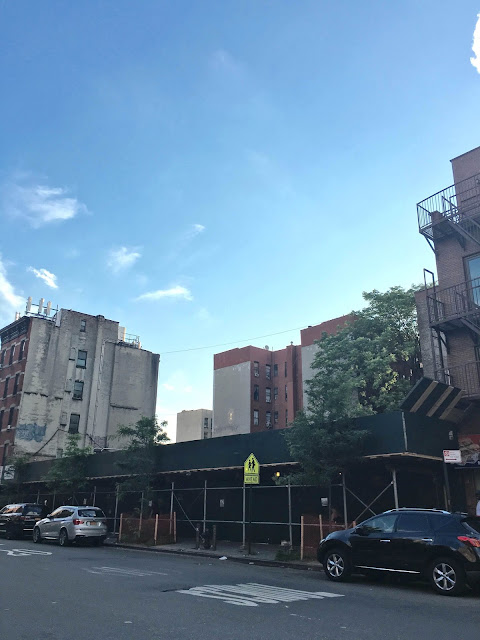 Workers have wrapped up the demolition of several one-level storefronts, including Rite Aid (and Shady's pizza!), on Avenue D between Sixth Street and Seventh Street... 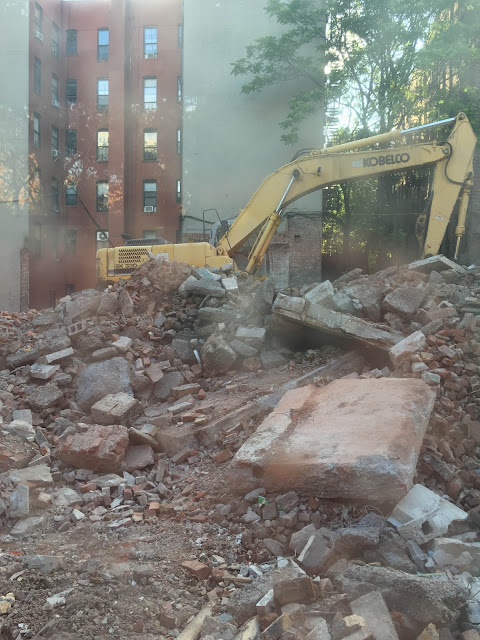 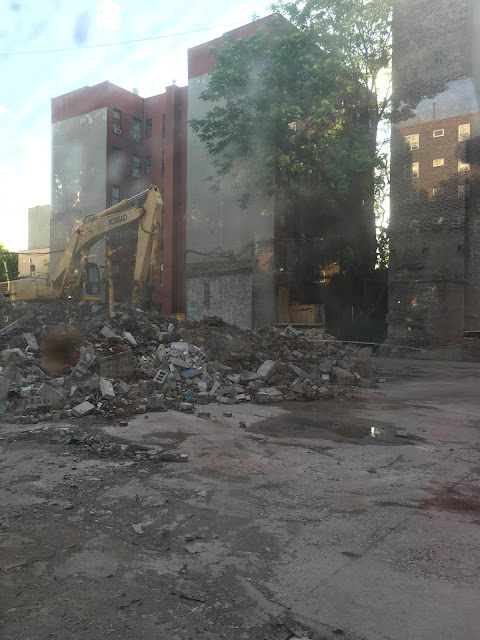 In January, the Rite Aid relocated one block north to the vacant retail space in the Arabella 101 building.

L&M Development Partners, one of the groups involved in the Essex Crossing development at the former Seward Park urban renewal site, bought the three parcels of 79-89 Avenue D in 2014 for $12.5 million.

We have not seen any renderings for the new building just yet. GF55 Partners, whose area work includes Jupiter 21 and 48 Bond, are the architects of record.

This stretch was an eyesore for a long time. No one will miss it.

Speak for yourself, 7.05, I will miss the sun, light and air that low "eyesore" provided.

Mark my words, these condos will fetch for at least two million dollars each once they are complete and on the market. I work in real estate and the property values in this neighborhood are accelerating. Before you know it, a studio will cost around $2700. No shit. There is also rumors of eventually eliminating the projects for glass towers overlooking the east river. Change is upon us people....

Gojira I spent my Youth down there, there was never any sun and light down there. You must have been on Acid when you saw them on "The Ave".
As for the Realtor clown above I feel for those suckers who will be plunking Mommy and Daddy's money to live down there. Nothing Goo'D' ever happens on Ave 'D'.

If you're in real estate Anon 6:30 you'd realize that "rumors" of getting rid of the projects is a total pipe dream.

Building on the West side of Ave D will continue as private development continues. The pressure will mount to eliminate the criminal elements in these projects over time, the projects may very well survive another 15 years. But the make up of the resident group will change dramatically poor will be accepted but criminal will not by a gentrified neighborhood.

If I had to place money on a bet, I'd say the removal of the projects will eventually happen, perhaps not for a long time though. The poor are and will be pushed out. It is just a reality. Even those who are college educated with careers such as myself can barely afford to remain here, let alone buy property, even in a spot on Ave D, a spot I'd never live on, no matter what. I hope for the sake of the developers and owners, they don't jack up the prices too much. After all, would you want to pay two to four million dollars to overlook the projects? I think not.

"...there was never any sun and light down there" - really, Anon. 8.59? Take a good look at the first photo in this post, and tell me what you see. What *I* see is a wide expanse of bright blue sky with wispy white clouds on a brilliantly sunny day, right at the site you claim is such an eyesore. When that "upscale" 12-story block of cement and steel and cheap glass is standing in that spot casting its shadow and blocking the image in that photo from ever being seen from that vantage point again, maybe you'll re-examine your statement. Or do you really mean to suggest that while the sun was shining everywhere else in NYC, somehow it stopped just west of D, which was thus eternally swathed in gloom and fog?

And not that it's any of your business, but the last time I dropped acid Richard Nixon was the POTUS. Smart-ass.