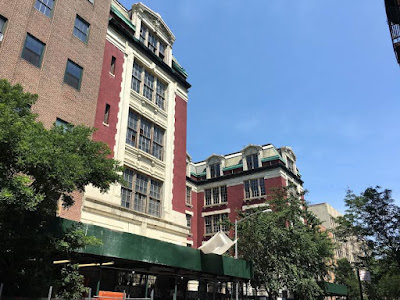 Last time that we heard anything about the former P.S 64 and CHARAS/El Bohio community center, the owner, developer Gregg Singer, was being sued by his investors.

The asset manager said it and the other investors put almost $8 million worth of debt and equity into the project, and after paying off the defaulted mortgage the development partnership took out a $22 million bridge loan at 11 percent interest, guaranteed by Onyx.

Despite earlier reports that Singer had signed the West Village’s Ballet School as a tenant, however, progress at the site struggled, and in July the company defaulted on the loan, kicking the interest rate up to 16 percent.

Singer apparently remains committed to converting the long-empty building that extends from Ninth Street to 10th Street between Avenue B and Avenue C into dorms.


“There is a shortage of quality student housing options in Manhattan,” Joshua Zegen, a managing principal and a co-founder of MRC, said in prepared remarks provided to COF. “Our financing of this project will help the borrower tap into that demand and turn a vacant building into a thriving housing option for students residing in New York City. This new development will provide a brand new student living facility with contemporary amenities, right in the heart of the East Village, one of the most artistic and diverse communities in the city.”

The article notes the new dorm will house 535 students, and include outdoor spaces for them.

More than three years ago there were reports that both Cooper Union and the Joffrey Ballet were leasing space here for students.

It is not known — publicly anyway — if Singer has any signed leases for the space, which still needs approval from the city to renovate. (A Stop Work Order remains on the property, dated from last August.) Singer did not comment in the Observer story.

Singer bought the formerly city-owned building on East 9th Street between Avenue B and Avenue C in 1998 for $3.15 million. There has been a movement to return the building to use as a cultural and community center.

[Updated] The former P.S. 64 appears to be for sale

The latest PS 64 debacle: Investors sue Gregg Singer
Posted by Grieve at 4:30 AM

I doubt the city would ever "return the building to use as a cultural and community center" since a neighborhood filled with a transient NYU student population and bankers in training care about community or culture. I would agree to let Singer covert the building but will demands such as: preserving the buildings Beaux Arts architecture, restoring the dormer he demolished to avoid the possibility of landmarking this building. Sign an agreement that the building can never be sold unless it continues as a dormitory since he claims how there is such a demand in our city for that type of housing. This agreement must be iron clad, made public and never become another Rivington House sham.

Jesus, doe we really need 535 more coddled students in our neighborhood? The post-baccalaureates are worse enough.

I still don't see how a college dorm—whose population is composed of transient residents—can be considered a "community facility."

500 plus more students with a drinking problem? ok, let's make all the commercial spaces bars and fast food outlets and maybe they'll stay close to "home".
they wouldn't have to walk far to get to a place with alcohol, and to eat after their binges.
and they won't have to drunkenly drive home,

There goes the neighborhood, again!

What the fuck does this developer not understand about "community use"? Just do it the right fucking way and get it done already.

@Scuba Diva: I don't understand it either, but dorms are considered "community facilities" - which is particularly perverse given the effect that NYU's dorms have had on the East Village.

Certainly we're not welcome to set foot in an NYU dorm. When I went into the lobby of Third North to notify them of a problem on their turf, the guard acted like I was an undesirable intruder. And when one NYU dorm was temporarily our polling place one election year, we had to use the janitor's entrance, and they had security posted there as if we, the long-term residents of the neighborhood, might be there to steal the building.

IMO there's nothing "community" about dorms, other than the size bonus NYU gets because "community facilities" are permitted to be built bigger than any other structure (hotel, apartment building) would be allowed to do in the same space.

No no no...y'all are missing the point. The dorm BS is a ruse.

Singer wants to make the building with high-end dorm "rooms" that can easily be converted into apartments. In a few years he claims a financial hardship that he can't break even, get the zoning switched to residential, converts the building into a condo (which he sponsors), and makes big bucks on the sales.

It's all a bait-and-switch. That's what it's been all along.

@blue glass
Taking away housing to keep drunk students is impossible the only way to keep students from getting drunk is to take away their drinking spots. Show up at community board meetings, fight against new liquor licenses and fight against renewal if those licenses the same way, show and be heard, get your neighbors to sign a petition, document rowdy bars with videos, photographs and testify. It is not the sober students destroying our quality of life its the bars. We got ride of crack and heroin now we need to get rid of sports bars and bars that host events like Santa Con.

NYU is so corrupt. It also has fallen in reputation as a quality college. Hahahaha! Hate college students. They bring nothing to our community except noise and pools of vomit.

bring it on! 99 floors and nobody home!

It is not a good solution for the EV to have another Dorm. This is our version of trash hauling sites. We have enough in our community. Some other community has to share the burden of this kind of trash!

a dorm for a nonprofit educational facility with long-term lease is legally considered a community facility. NYU has nothing to do with this dorm. It is Cooper Union and Joffrey Ballet.

I'm sure it will not be some huge upheaval or anything, but yikes. The thought of 500+ new spots for incoming pizza-faces is something out of a nightmare.

We need to get our community center back! What once was a thriving center of community resilience and artistic creativity, this building has been sitting vacant for too long while controled by Singer. It was former mayor Guiliani's war on community organizations that caused this building to fall into the hands of a greedy investor who thought he could turn a quick buck by getting regulations on this building removed or not enforced by his cronies in gov. The long period of sitting empty is an abject violation of the purchase contract, hence that contract should have already been voided. Citizens of the East Village, artists and educators have been deprived of their access for too long. Stop this injustice! City action now!

@2:14pm: Oh it will be a huge upheaval, trust me. I live down the block from Third North: 900+ freshmen in 1 building. Every September another 900+ newbies, all eager to "live large" as soon as mommy & daddy's car pulls away from the curb. If the parents had any CLUE they'd keep these kids way closer to home where they could continue to helicopter-parent them.

How is it that PARENTS don't notice that this area is nearly wall-to-wall bars? Is it ordinary stupidity, or do they deliberately not observe the area while they're here?

Anyway, back to Singer: My bet is that that building will be in litigation hell until Singer dies, then his estate will settle. I long ago concluded that Singer is nuttier than an almond cake.

5:13 PM: What was in the purchase contract and where have you seen it?

I don't know if anyone else notices, but I see the building from my room and you can see clear through it because central walls have been removed. (I'm on the 6th floor and look down on it.) They may not be structural, weight-bearing walls, but I was in that building when it was CHARAS; they've removed a lot of substantial structure regardless.

I wouldn't be surprised if Singer's intention all along was to flip the building into luxury lofts; he was probably told from the start that it would be no problem to change the deed once he won [read: was given] the building at auction.

Such a bait-and-switch would make any normal person crazy, never mind Singer.

Going on 20 years as an eyesore and reverse ageists are still complaining about young people. Get a grip.

M8 ridership will increase, so maybe that means that weekend service won't be cut again, but the M14 on Ave C is beyond capacity.