Plans to convert the haunted beauty 104 E. 10th St. into a single-family home with 2 extra floors 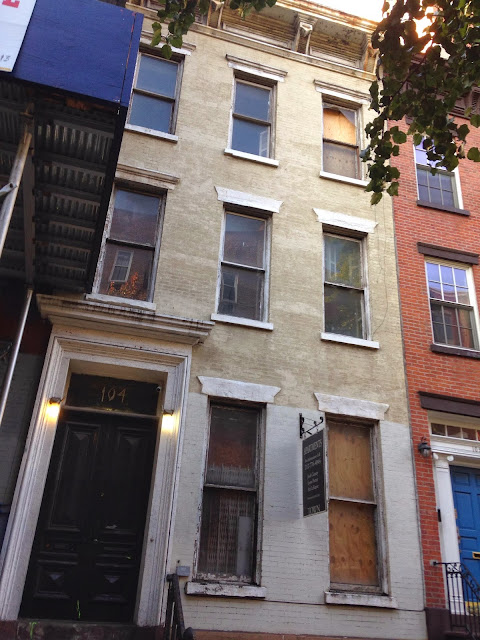 The townhouse at 104 E. 10th St. between Third Avenue and Second Avenue has always intrigued me.

Perhaps the fascination started with this article from 1998 in The New York Times on the crumbling building that was serving as an SRO:

There is a certain house in the East Village that some neighbors believe is haunted. It is on 10th Street. The doors are peeling and the address "104" looks as though it was written in blood.

The lone tenant at the time was playwright, poet and performance artist Edgar Oliver. (Jeremiah Moss had a nice history on Oliver living here in 2011.)

"The house I do believe is haunted. Alas, it is only with memories." He recalled the wet nurse, Frances, who washed rags all day and was eventually carted out to the mental asylum a decade ago. There was "The Invisible Man," who was never heard or seen. The homicidal brothers who plotted to kill Mr. Oliver. Helen, his sister. And Old Man Milburne, the last tenant, who recently went to the old folks home.

In 2010, Curbed noted that "the place is so creepy, even the PropertyShark file photo shows a specter of some sort hanging out in one of the windows." 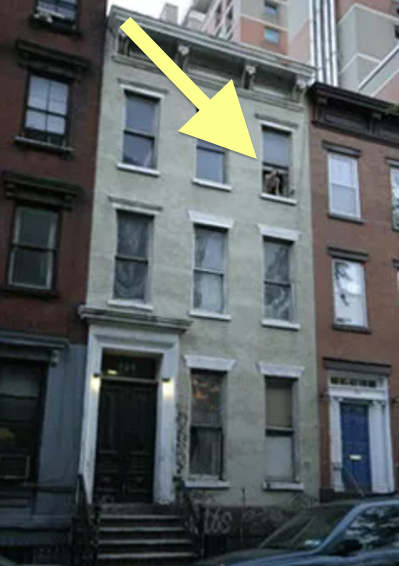 The address, one of many properties owned by reclusive real-estate baron William Gottlieb, hit the market in March 2011 for $5.6 million... the listing disappeared then reemerged for $3.9 million. Per the original 2011 listing:

Built in 1879, this magnificent, sun-drenched residence is a restoration enthusiast's dream project.

The building offers an unparalleled opportunity to design the home you've always wanted. Its current features include four floors, eight fireplaces, skylight, original moldings, a quaint south-facing garden, an English basement with a separate street entrance, plus a basement below. With additional air rights, this building is primed for vertical expansion, offering opportunities for a roof deck, duplex unit, and more.

In November 2013, a for rent sign arrived noting that apartments were available ... 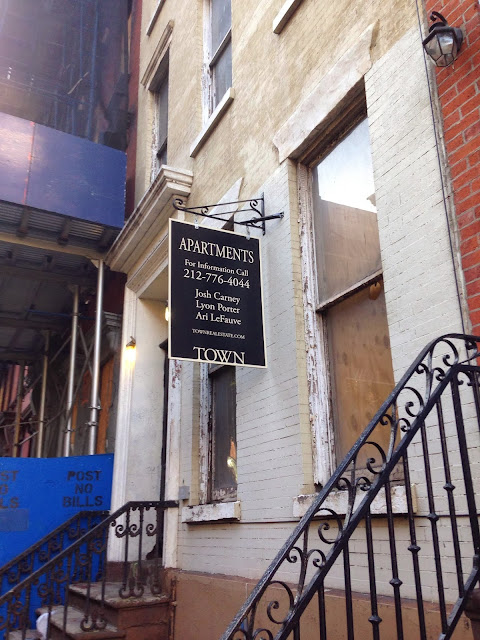 As far as I know, though, these units never hit the market.

And now: No. 104 recently received the plywood treatment... 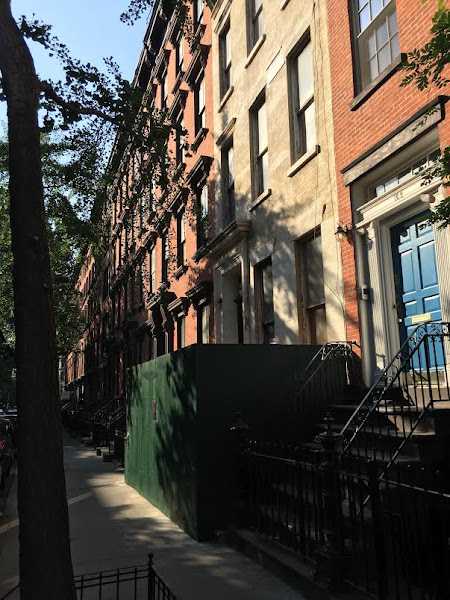 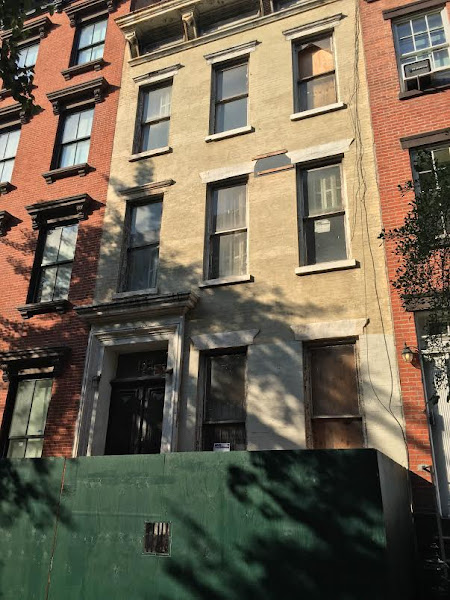 Plans are on file with the DOB (still awaiting approval) to convert the building into a single-family home with two extra floors. According to public records, the owner is only listed as North Sydney LLC, which was incorporated in Westchester County. So at least some mystery remains with the address. 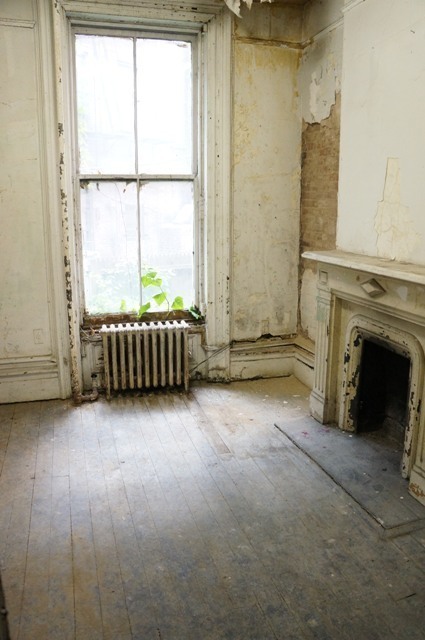 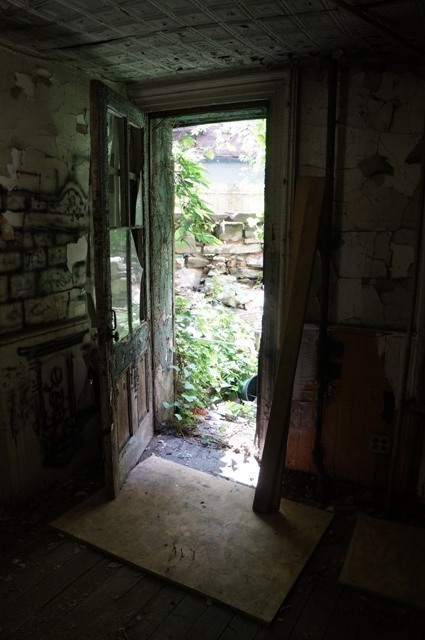 One would think this block is landmarked or at least adding two unsightly floors would meet with some resistance. I am amazed at how much of the original details appear to be intact, something that is truly rare. I suspect the new owner will strip it to the bone, paint it white, install can lighting and mid-century furniture, ugh.

I remember many many years ago, when it was still semi-abandoned, Mariam Friedlander had used this as her campaign headquarters for her last, failed election run.

I'm with Anon. 8:34, no way these lovely interiors will be saved. Whoever buys this will want all the "luxury" their "wealth" can provide, and that will mean ripping away the beauty and history that drench this little survivor so it can be sanitized, updated, and blandified. Such a shame.

Really beautiful. Always with the two additional floors though, ugh. You've got enough room in there!

104 East 10th Street, along with 102 East 10th Street, was designated in 1984 as the St. Mark's Historic District Extension. These 2 buildings were mysteriously left out of the original district designation in 1969. At that time the building was owned by the Councilman from the area, Saul Shareson (sp?)whose actual residence in the Stewart House was not in the district he represented. Whether that was the reason it was left out was never confirmed.

The addition of two floors will have to go through a public approval process including the Landmarks Preservation Commission.

Boy, here we go. The problem with preservationists to the nth degree, as people who have already commented seem to be, is that they don't have the $$$$ to buy these properties and restore them to their faded elegance. If, as Anon 10:12 reports, these two houses were left out of the Historic District designation, there may be nothing that can be done. 104 has been an unattended eyesore for almost as long as I have lived in this neighborhood (and that is 20+ years), so I welcome its restoration even if it does not go back to what people think (on what basis) the original design was. He / She who buys such a building makes the decisions (within reason) of how they want to live. So I guess we must now settle in for an endless barrage of posts against the new owners, their plans, their money, etc. etc.

I understand the expense in restoration. Maybe the great salvageable aspects could be donated or sold instead of smashed and thrown in to a landfill. I know people that would treasure that ceiling and door handle.

I think the new owner will do a stunning historically significant restoration...

What's scary is that this is another building in the East Village bought for use as a single-family home.

I have to agree with 2:33 PM. I know we all have reason to be cynical in these days of fugly "luxury" shitshows, but there's no reason why the buyer of this particular house wouldn't restore it. Some rich people (rich enough to buy and restore a 19th-century townhouse in disrepair) still have good taste, thankfully. And as someone who grew up in a house built in the late 1800s, I'm really OK if the buyers want to modernize the bathrooms and kitchen! Not everything needs to be preserved! ;)

The two story addition was not approved by Landmarks. The designers are now working on a one story addition that will be invisible from the street. While the company who owns this property has done some incredible historic restorations, it will prove difficult in this home. Nothing is salvageable, and it is in significantly worse shape today than it was in those photos from 2012. The entire garden floor has rotted out and is caving in, meanwhile the mantles are crumbling into nothing.