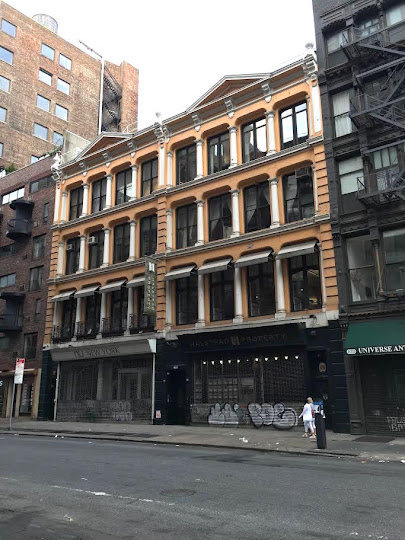 This past Friday, reps for Caerus Group and Quality Capital filed plans for a 14-story, 70,000-square-foot retail-and-office building at 827 Broadway, as The Real Deal reported.

Retail will span the first three floors of the building, with the remaining 11 floors devoted to office space. The plans call for terraces on the fourth floor and roof — an amenity many landlords in the Midtown South market consider a necessity in order to attract tenants.

According to DOB records, there were plans filed in December for a "10-story vertical enlargement ... to existing 4-story building." Now there are just plans for a new building.

So apparently this means the two existing four-story buildings between 12th Street and 13th Street will be demolished. There aren't any demo permits on file yet.

Here's some history of the buildings:

Email ThisBlogThis!Share to TwitterShare to FacebookShare to Pinterest
Labels: 827 Broadway

So no landmarks protection here in "Midtown South?"

The Landmarks "Preservation" Committee - what a joke - is on permanent vacation. They do nothing, save nothing, just stand by complacently as more and more of our history is smashed into rubble.

HOW CAN THEY BE ALOWED TO DO THIS?

why would you get rid of those beauties?!? at least build on top of em! short-sighted fools!

The charm of the Village, from University Place going east, has been truly trashed by rapacious developers. Developers with no taste and no conscience. The existing buildings are beautiful and unusual. I'm sure the developers will go with generic glass-clad bullshit.

They have taken too much from us already. When does it stop?