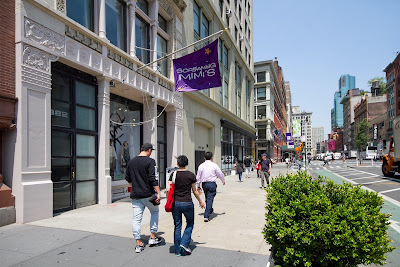 On Friday, we spotted a retail listing for 382 Lafayette St. — longtime home of the vintage clothing boutique Screaming Mimi's.

Not a great sign, obviously. So we checked in with Screaming Mimi's owner Laura Wills to find out what was happening.

Turns out the building was sold about a year ago, and Wills decided to relocate.

And that spot is 240 W. 14th St. between Seventh Avenue and Eighth Avenue.

"We are very excited — it's a beautiful space. The parlor floor of a brownstone with lots of character and amazing light. It is very Screaming Mimi's," Wills said. "We're renovating now and we hope to be open by Sept. 1."

She will be staying on Lafayette Street through October and celebrating Halloween in both locations.

The shop has been in this storefront between East Fourth Street and Great Jones for the past 25 years. They were briefly around the corner at 22. E. Fourth St. before this. Screaming Mimi's, now in its 37th year, started on the Upper West Side.

This stretch of Noho is also undergoing a rapid luxurification phase, with the arrival of two upscale residential projects a block to the south... and with more on the way. (Here and here and here.)

"To be quite honest, we never considered staying. Lafayette Street was a wonderful home for almost 25 years but it has changed so much," Wills said. "I fear it will very soon be blocks of big glass and steel storefronts with no soul. Mostly everyone who opened when we did is gone."

She acknowledged that area of West 14th Street, where the West Village, Chelsea and the High Line converge, is also changing. However, Wills noted: "It still has character and characters!"

The Greenwich Village Society for Historic Preservation named Screaming Mimi's its Business of the Month in March. You can read about more history of the store in this post.

Cyndi Lauper worked at Screaming Mimi's in the early 1980s before her recording career took off ... here's Lauper returning to the store to shop in 1986 for an MTV clip...

Honestly, W. 14th is probably a much better spot for Mimi's. I know I avoid Lafayette like the plague these days. Over on 14th, they'll be near to a lot of other vintage shopping: Beacon's on 13th/5th, Rags-a-Go-Go on 14th b/t 7th and 8th, Housing Works and Angel on 17th, and the newish Goodwill on 14th/5th. The Vintage Twin has had pop-ups a few times on 14th b/t 5th and 6th a few times too. Vintage shoppers tend to hit up a bunch of places in one outing (nothing beats the perennial champ for this: the East 23rd corridor), so the Mimi's move is good news to me. Also, this brownstone parlor business sounds beautiful, so I'll absolutely be checking it out come the fall. woot woot

I miss Canal Jean Co. Time for a comeback on Broadway!

It looke like an open casting for that movie "Workin Girl".Love Cyndi.

To me, Screaming Mimi's was always a comforting presence on Lafayette. It was a reminder of an era that now has mostly disappeared. Best of luck in your new location.

LOL @ Melanie Griffith in Working Girl when she had to serve the dim sum.

I wonder if Madonna harbored resentment towards Cyndi Lauper like "WTF is this chick from Queens biting my style?" LOL