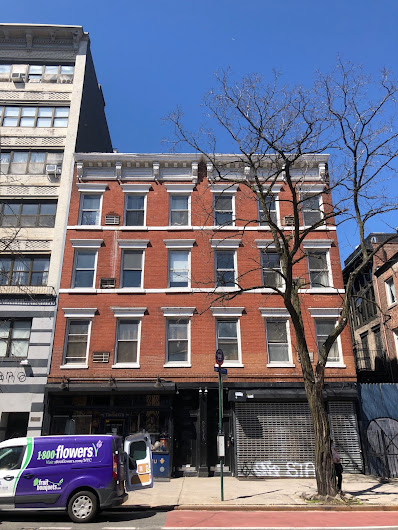 There's a new owner for 45-47 Second Ave., a 6-unit building that dates to 1867 here between Second Street and Third Street.
A tipster notes that house flippers David Luttway and Dana Lowey Luttway (via HOLLISWOOD2AVE LLC) are now the owners.
Several of the residences are currently vacant, and two other remaining tenants are in rent-stabilized units without leases, per the real-estate listing.
As the Westside Rag has noted, Dana Lowey Luttway "is known for her skill at flipping upscale townhouses." It's not known what their plans are for this building. There was an original $9.9 million asking price.
There are currently two commercial spaces (one vacant) and one with a lease until December 2022. That would be Timbuktu, a tranquil shop that specializes in items from Morocco.
H/T Upper West Sider!
Posted by Grieve at 5:00 AM

How can one live in a rent-stabilized unit without a lease? This doesn't bode well for the residents. Timbuktu is a great shop and this is concerning for them as well. "House-flipping" never ends well for those already in place.

"How can one live in a rent-stabilized unit without a lease?"

In the old days, you could often rent a place without ever signing a formal lease. If you look at the rent stabilization laws, you'll see special provisions for that situation. These are presumably very long-term tenants.

But, yes, every current tenant should watch their back, and be ready to reach out to DHCR at the first sign of shenanigans.

Timbuktu is an amazing shop that has been a staple of the EV for decades. You won't find manyt of these items in other stores as they are hand picked and imported by the owner directly from abroad.