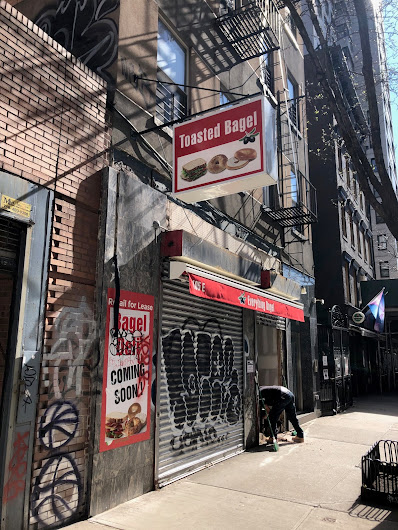 Updated: A good point in the comments... this all might be just to show up the potential for a tenant... and isn't necessarily going to be a new bagel place...
Noting the recent arrival of bagel signage over at 105 E. Ninth St. between Third Avenue and Fourth Avenue. (First post on this in November.)
Not sure at the moment what the business will be called... there are three signs in total: Bagel Deli, Everything Bagel and (gulp) Toasted Bagel.
The sign with Toasted Bagel is also odd as it includes what looks like two slices of bread in the form of a sandwich, which isn't a toasted bagel. Anyway!
Yuba, the 9-year-old Japanese restaurant, closed here last summer as business dwindled during the pandemic.
Posted by Grieve at 5:00 AM

With all the bagel shops that have popped up in the past few years you would think that ONE of them would offer a bialy!!!

This has to be a joke

@5:05 - Davidovich, which took over the Native Bean space on Ave A & 3rd St has bialys, but I haven't tried them yet.

But none of then offer bulkas! (And yes, I know Kossar's does, but they changed the recipe and they're nowhere near as good as they used to be.)

Ahhhh! I didn’t even think about that...

I found a card tucked in a book for the East West Cookery - "A Natural Foods Restaurant - Traditional Vegetarian and Fish Cuisine" 105 E. 9th St. It has a nice drawing (unsigned). I'll put it up on Twitter.