Activity at the former Associated on 14th Street 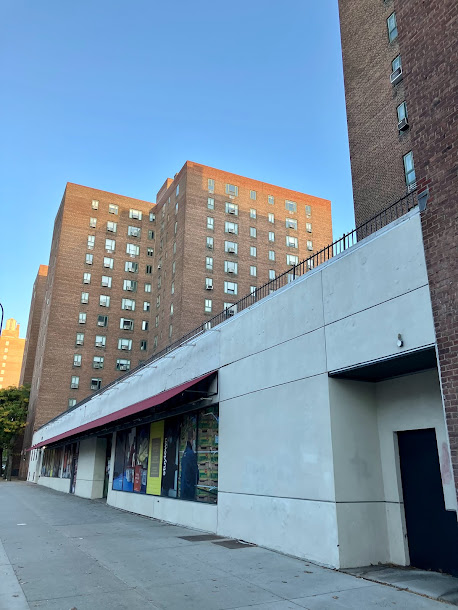 For the first time in a long time, there have been signs of activity at the former Associated space on 14th Street between Avenue A and First Avenue in Stuy Town.
Asbestos Abatement signage went up earlier in October... (and the Wrong Language police checked in later)... 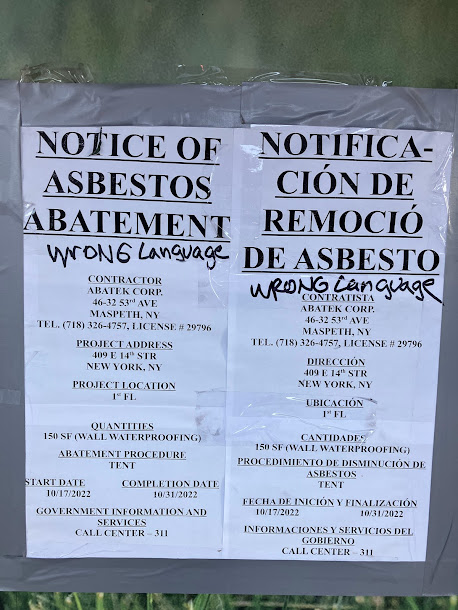 As you may recall, back in February 2021, Stuy Town management informed residents that Chef's Local Harvest, a 10,000-square-foot grocery store, would open in this space (this year).
The family-run market is owned and operated by father-son duo Paul and Aaron Fernandez, who helped create the Union Market chainlet (as seen on Avenue A and Houston) and Ideal Marketplace in Chelsea.
Here's more from the announcement to residents in February 2021:

Paul Fernandez has operated best-in-class supermarkets in New York City for the last 40 years and has worked to provide quality service and products throughout his career. He grew up in Little Italy after immigrating to the United States at 14, and is a founding member and principal in the Union Market chain, as well as America’s Food Basket Banners.

Chef's Local Harvest will feature a combination of fresh produce, fish and meat, in addition to a wide selection of prepared food and grab-and-go options via a café, deli and more.
The space will also conveniently include an entrance directly connecting to the Stuyvesant Town-Peter Cooper Village community, providing quick and easy store access for our community. The store will be open seven days a week from 7 a.m. to 11 p.m.

We're told that this is all still going to happen... and that there's a discussion about some kind of entertainment/performance space in the store... with an outdoor cafe and a new entrance at the mezzanine level. (The deal included 7,300 square feet of the usable basement, per The Real Deal.)
As we understand it, given the unique situation of the interior of the Stuy Town-Peter Cooper Village being zoned as R7-2, any type of commercial enterprise must be a "resident amenity." Hence, any liquor license has to be a "club" one only for "residents and their guests."
Associated closed in December 2019. Joseph Falzon, the store's owner, previously told Crain's that a confluence of factors had cut business nearly in half. For starters, construction on 14th Street for the L train obscured the supermarket with a 12-foot fence for nearly two years.
Posted by Grieve at 4:59 AM

If they're only starting asbestos abatement now, this thing won't be open until 2024. And we just need a supermarket, we don't need any of that other clutter.

Why would a different supermarket not run into the same financial problems? There's a lot more competition nearby now, the new subway exit at Ave A makes the location less attractive from a foot traffic perspective, there's fewer commuters etc. I wish the location luck but this seems a tough nut to crack.

This is great news. There is a definite need in this area for another traditional supermarket. There is C town but I say the more the merrier. I go to Trader Joes and Target alot but sometimes they don't cut it or don't have things that a regular supermarket has like a deli or produce that lasts more than two days.

It will also be a huge help that the subway work is complete. I just hope they have good security because I know TJs and Target have had issues and had to beef up recently.

A good alternative to TJ's would be welcome. Love the idea of fresh fish, and some prepared dish which are not frozen.

This is good news for the neighborhood and especially for seniors. as we do need a traditional supermarket in the area.Target has a very limited variety of groceries and is often out of stock on even basic items like bread. For awhile they didn’t have peanut butter or even grape jelly. They run out of bananas and their produce section is very limited. Even their milk has a funny taste. Ideal market on the west side is a very well-stocked supermarket with decent prices. You can find almost anything you want there. They have a huge produce section and thousands of SKUs.

You realize it was the construction of the new subway entrance and the repair work from the Sandy damage that helped kill the associated and a bunch of other businesses btw 1st and A?

I, too, welcome the addition of another supermarket in the neighborhood. Trader Joe's and Target are good for some things, but a traditional supermarket is still needed. For instance, you cannot buy foods like a decent beef eye for roasting, Brillo pads for cleaning it up, or even simple things like Progresso breadcrumbs!

I think the entrance to the community (to Playground 7) is unwise. It will allow easier access to people who aren't part of the StuyTown community. Other than that it will be good to have a real grocery store here again.

I shopped at least twice a week at Associated and have really missed it. I find it more comfortable to be able to just walk into a store rather than use an escalator or elevator to do my food shopping. I use a walker now so it’s even more important to have a ground level supermarket available to me with produce and fresh food choices!

Somebody please tell Fanzon the L construction is done. Christ, I miss that place.