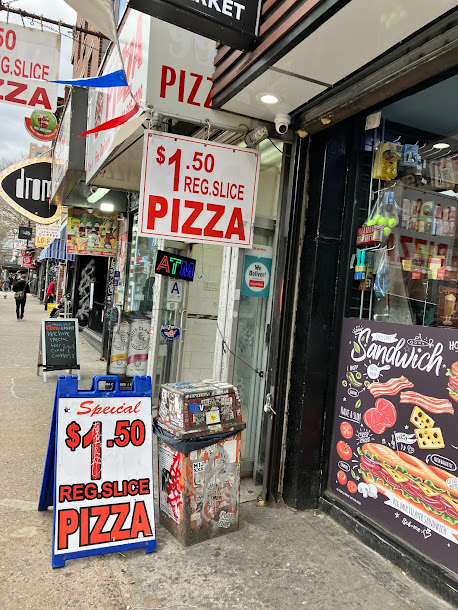 As you may have recently noticed, the price of 99-cent pizza has crept up to $1.50 at neighborhood slice joints... with $1.50 signage covering the 99 cents pricing ... 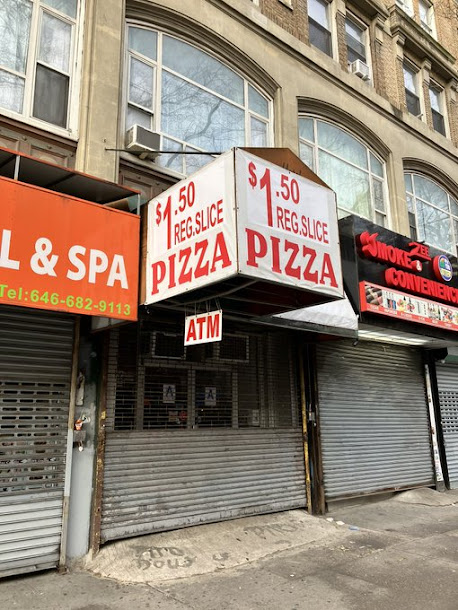 This was an expected increase ... with media reports dating back to the late fall warning of an uptick thanks to inflationary food costs, the global supply-chain crisis and national labor shortage. Per the Times on Dec. 22: "The $1 Pizza Slice Becomes Inflation's Latest Victim."
Abdul Muhammad, owner of 99 Cent Fresh Pizza, the eight-location chain in Manhattan, told The Guardian last December that the continued rise in costs may force him to raise his slice prices for the first time since opening in 2001.
"I have to think about it because my customers, many of them unemployed and struggling to make rent, can't afford to pay more," he said. 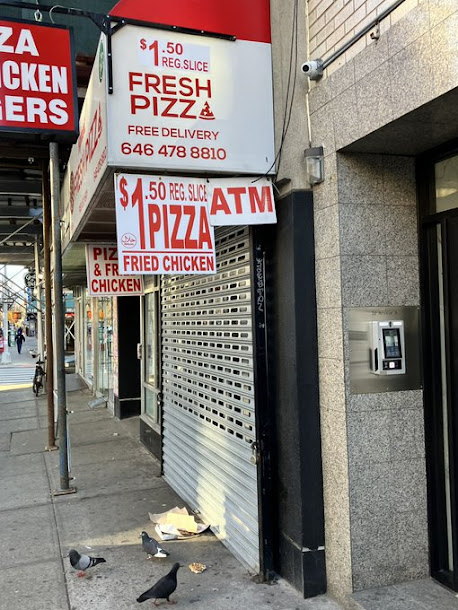 Of course, the price of a slice has gone up across the board.
As Bloomberg reported earlier this month:

The "pizza principle," a mainstay of New York economics for more than four decades, states that a slice of cheese pizza will always be the same price as a subway ride.

The rule has largely held true since first conjectured in the New York Times in 1980, with any increase in pizza prices tending to predict a matching hike in public-transit fares.

Not anymore. Prices for plain slices are soaring above $3 throughout the city along with commodity and labor costs. With the Metropolitan Transportation Authority freezing fares at $2.75, the gap between the price of riding downtown and satisfying late-night hunger pangs is growing quickly. 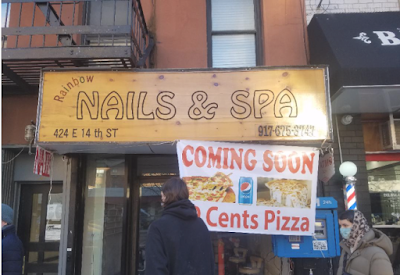 A 99-cent sliceria is coming soon to the former Rainbow Nails & Spa space at 424 E. 14th St. between Avenue A and First Avenue.
EVG regular Gojira, who shared the above photo, notes that the interior "is still littered with the salon furnishings, so no idea when this is all going to happen."
This is the latest no-frills pizza shop to open around here ... a 99-cent joint opened last fall at 246 E. 14th St. between Second Avenue and Third Avenue ... joining the September debut of 99-Cent Fresh Pizza & Hot Dog at 131 Avenue A between St. Mark's Place and Ninth Street.
Meanwhile, a New York Sal's Pizza is opening soon at 536 E. 14th St. between Avenue A and Avenue B.
Posted by Grieve at 5:00 AM 8 comments: 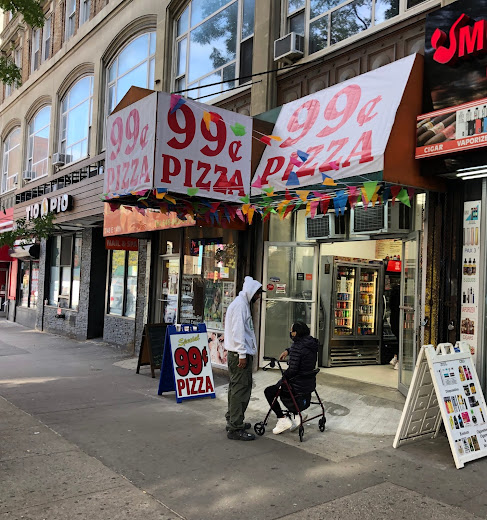 A 99-cent sliceria is up and running now at 246 E. 14th St. between Second Avenue and Third Avenue... the name appears to be 99¢ Pizza with a special board highlighting 99¢ pizza.
This space was previously Hotel Tortuga, the inexpensive Mexican restaurant that bowed out at the start of 2020 after 10 years in business under two sets of owners.
Posted by Grieve at 5:00 AM 4 comments: 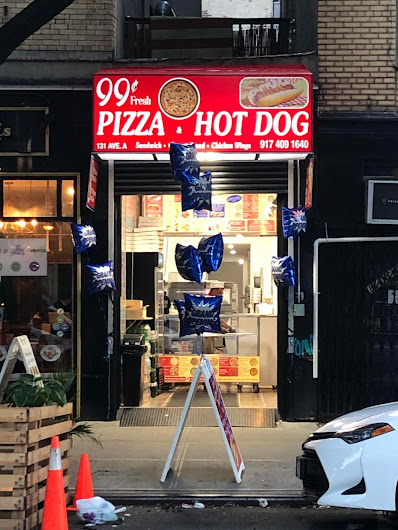 Meanwhile, that Ralph’s Famous Italian Ices on the next block at Ninth Street is looking very close to opening... with new signage up on the front windows (H/T Steven!) ... 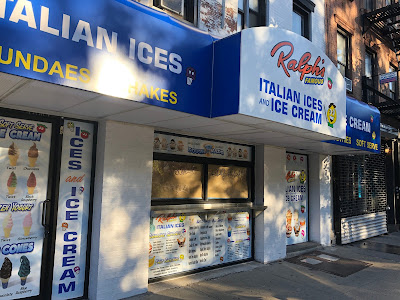 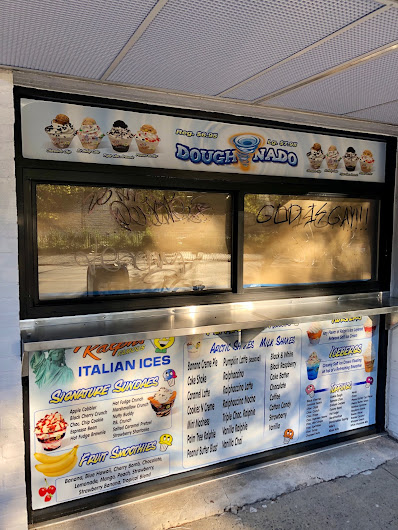 Here's the 99-Cent Pizza & Hot Dog signage on Avenue A 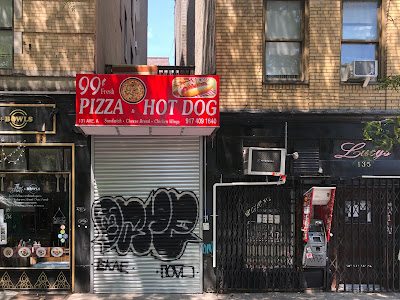 The signage arrived back on Friday here at 131 Avenue A between St. Mark's Place and Ninth Street... 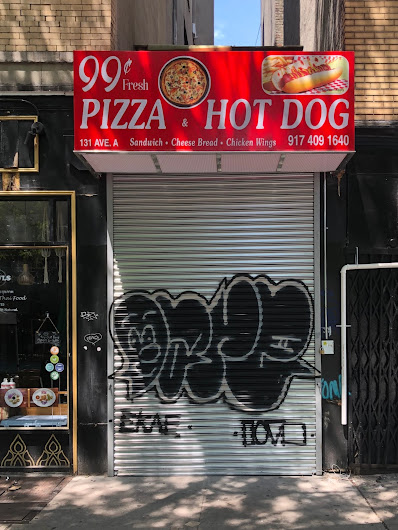 Aside from pizza and hot dog, the small to-go shop will serve — per the sign — "sandwich, cheese bread and chicken wings."

And as previously noted, this will be the third 99-cent pizza shop on Avenue A between Houston and Ninth Street, joining Alphabet 99-Cent Fresh Pizza and 99¢ Pizza. (There's also FDR 99¢ Slice Pizza just off of A on Second Street.)
Posted by Grieve at 5:51 AM 2 comments:

Your 99-cent pizza update on Avenue A 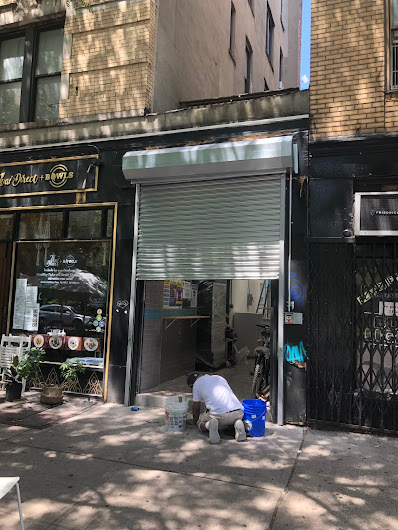 As a reminder (way back to March 11), a 99-cent pizza slice emporium is in the works for 131 Avenue A between St. Mark's Place and Ninth Street.

The space is shaping up, as these photos via EVG 99-cent pizza slice emporium correspondent Steven show... 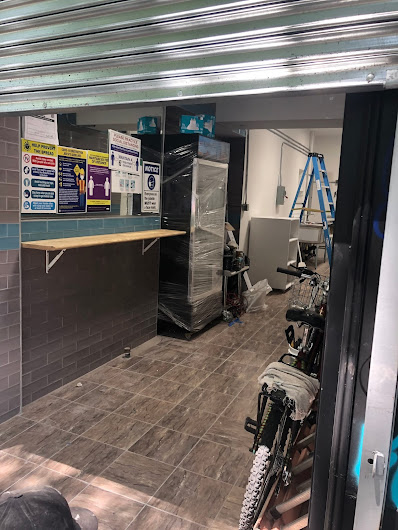 This must be a successful business model: This will be the third 99-cent pizza shop on Avenue A between Houston and Ninth Street, joining Alphabet 99-Cent Fresh Pizza and 99¢ Pizza. (There's also FDR 99¢ Slice Pizza just off of A on Second Street.)
Posted by Grieve at 6:00 AM 2 comments:

More 99-cent pizza for Avenue A; plus hot dog 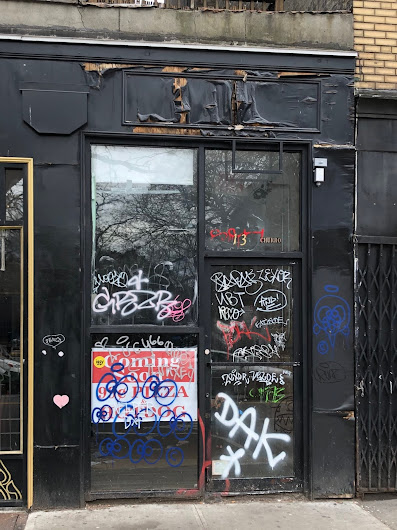 Blink and you may have missed this coming soon signage at 131 Avenue A between St. Mark's Place and Ninth Street... Incoming: 99-cent pizza and hot dog (singular)... 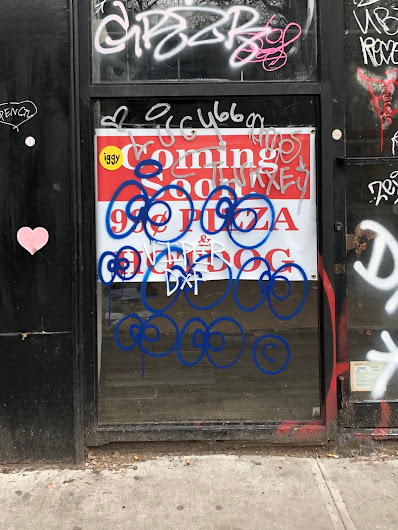 This will mark the third 99-cent pizza shop on Avenue A between Houston and Ninth Street, joining Alphabet 99-Cent Fresh Pizza and 99¢ Pizza. (There's also FDR 99¢ Slice Pizza just off of A on Second Street.)

The latest 99-cent pizza shop takes over the sliver of a space last leased by Sorbet Cray Cray.

Thanks to Steven for the photos!
Posted by Grieve at 4:10 AM 5 comments: 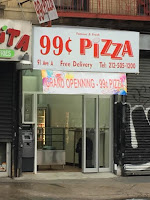 The discount pizzeria had its Grand Opening last evening here at 91 Avenue A at East Sixth Street.

The pizzeria is operating out of the space that last housed Benny's to-go. Not sure what's going on with the former D-Lish Pita storefront next door. There has been some work done on that space as well.

Meantime, let us know if you try this pizza. (Seriously.) We'll also post a night-time photo of the storefront some time. It is quite bright. (Seriously.) 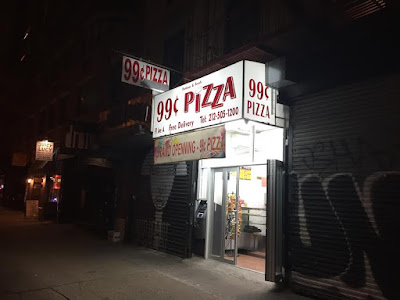 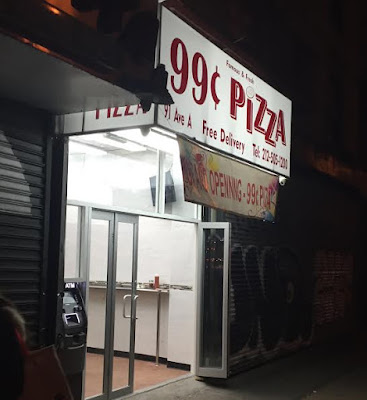 Previously on EV Grieve:
How about some 99¢ pizza for Avenue A 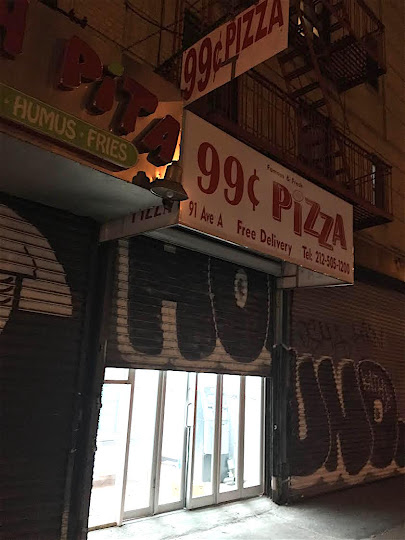 Signage is up for the incoming 99-cent pizza dispensary at 91 Avenue A ... looks like the business is called 99¢ Pizza. (With the promise of being both "famous & fresh," per the sign.)

Previously on EV Grieve:
How about some 99¢ pizza for Avenue A
Posted by Grieve at 4:22 AM 11 comments:

How about some 99¢ pizza for Avenue A 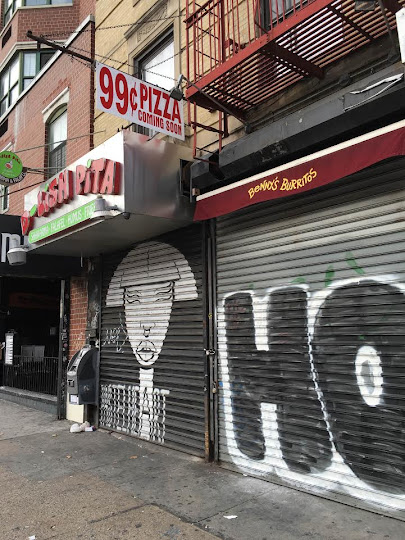 Workers have raised the "99¢ Pizza Coming Soon" sign in between two vacant storefronts on Avenue A near East Sixth Street. 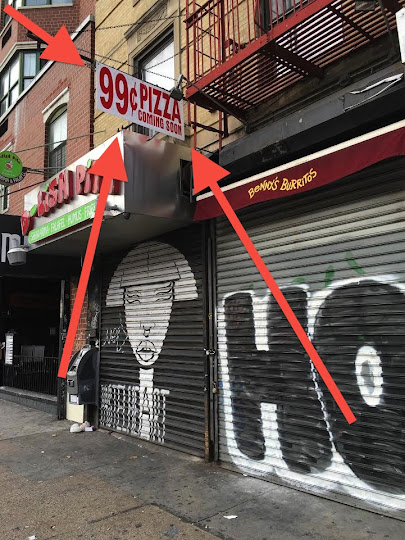 We've seen workers gutting the inside of the former Benny's to-go space in the past few days.