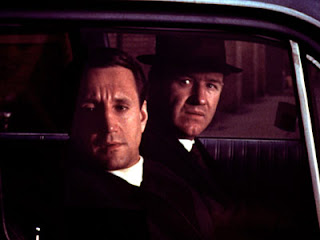 This week's New York magazine looks at 196 cultural works "that best defined the city since this magazine began." Which was 1968. Haven't had time to dig through it at all, but I did see the list of movies they have. Pretty much what you'd expect.

In any event, the list reminded me again that it has been too long since I've seen The French Connection. I thought about the film last week when Jeremiah was disucussing the history of Ratner's. I remembered that scene where Popeye Doyle (Gene Hackman) and Cloudy Russo (Roy Schieder) do a stakeout at the now-defunct Ratner's on Delancey.

The bowery boys had some nice observations on this classic when it played last summer at the Film Forum.
Posted by Grieve at 11:55 AM