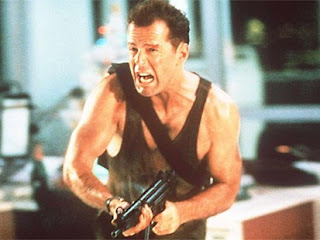 BRUCE Willis is not being warmly welcomed by the anarchists, Marxists and counter-culture riffraff of the Lower East Side now that he's opened the Bowery Wine Company on East First Street. "We want to show our opposition to right-wing Republicans opening yuppie wine bars in our neighborhood," activist John Penley told Page Six. Penley, who is organizing the August celebration of the 20th anniversary of the riots in Tompkins Square Park, said, "We're getting a pig and we're naming it Bruce." The whole, roasted pig from Chinatown will be served while folk singer David Peel serenades with his anthem, "Die Yuppie Scum!"

East Village Podcasts recently paid a visit to BWC and filed this report:

BWC feels like an upper west side transplant with its wide-open, gymnasium-like space and track lighting. I’d say loft-like.. but the whole Avalon Place structure reminds me of a new development from the suburbs - spotless and well-fireproofed. Surely, there must be a few doctor’s offices nearby.

when is this happening--do you know?

I wish I knew...I couldn't find a thing on it. Outside the Page Six item.

Thank the good Lord the city is cleansing itself of this filth. Onward to total yuppification. The 70's - early 90's will some day forgotten like a horrible nightmare.

We are organizing, with our friends and fellow activists, several free punk shows in Tompkins Square Park that will commemorate the mini police riot of 7/31/88 and the larger police riot of 8/6/88 in and around the park.

The first show, sponsored by the SHADOW newspaper, will take place on July 27, at noon and the others will be a two day show, from August 2-3, also at noon.

In addition to the commemorations, we will be addressing the rampant gentrification, destruction and loss of lower-income housing and alternative venues, as well as the death of true New York culture, thanks to real estate developer greed fueled by the invasion of monied transients.

We will be publicizing these shows in the next few months.

Thanks for the comments...and information. Look forward to more details about the shows this summer.