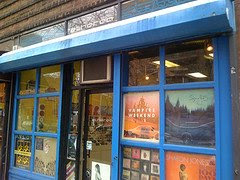 For a local music shopper with a memory of even just a few years, the East Village and the Lower East Side are quickly becoming a record-store graveyard. Across from Jammyland is the former home of Dance Tracks, a premier dance and electronic outlet, which closed late last year, as did Finyl Vinyl, on Sixth Street. Stooz on Seventh Street, Sonic Groove on Avenue B, Accidental on Avenue A, Wowsville on Second Avenue and Bate, an essential Latin store on Delancey Street — all gone, to say nothing of stores in other neighborhoods, like Midnight Records in Chelsea and NYCD on the Upper West Side.

“Rent is up, and sales are down,” Malcolm Allen of Jammyland said as he sold a few Jamaican-made 45s to a customer last weekend. “Not a good combination.”