There won't be anyone left to enjoy those safe, clean streets if we can't afford to live here 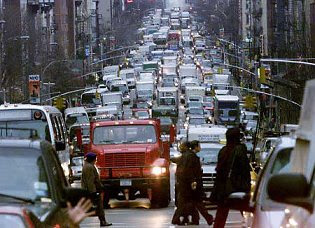 The new Citizens Committee for New York City Neighborhood Quality of Life Survey Report is now out. You can download the whole thing here.

Here are some excerpts, including the statement from Peter H. Kostmayer, president of Citizens Committee for New York City:

This year we surveyed almost 3,000 New Yorkers, online and on the street. We held survey events in more than 45 neighborhoods, focusing on neighborhoods we serve, some of the city’s poorest and most stressed, found that these New Yorkers think first about safe neighborhoods, but with the exception The Bronx, they seem fairly satisfied that their neighborhoods are safe.

One thing that we found different about this year’s survey, is that there seems to be a growing interest in life in the streets and on the sidewalks. Safe streets, dangerous intersections, street noise, safe conditions for walking and bicycling all drew more concern this year.

We think this is a good sign. In a city of neighborhoods (there are more than 400 in New York City) where neighbors live cheek-to-jowl, and where open space and parkland is in short supply, there’s a lot going on in the streets and on the sidewalks. Making the streets and the sidewalks of New York safer, cleaner and quieter took a hit when the Mayor’s courageous congestion pricing plan was defeated, but that only means that we at Citizens Committee for New York City need to do more to help neighborhood organizations throughout the five boroughs do more to take back the streets.

This is all fine, Peter. But there won't be anyone left to enjoy those safe, clean streets if we can't afford to live here.

Anyway, here's what the survey found in Manhattan (you can check out the report for all the boroughs):

Seventy percent of Manhattan residents rate the overall quality of neighborhood life
between good and excellent.

Residents rate the following five characteristics as the most important in determining the overall quality of a neighborhood:

The characteristics with which Manhattan residents feel most satisfied are:

The characteristics with which residents feel least satisfied are:

The characteristics that Manhattan residents report as most important, but find the least satisfactory are:

• Decent housing at a reasonable cost
• Clean streets, sidewalks and open spaces
• A quiet neighborhood
• Public officials who are responsive to neighborhood needs
• Safe conditions for walking and bicycling

In the list of top neighborhood problems overall put together by the Post, "lack of affordable housing" was No. 4 (right before potholes!) and "too much growth, overbuilding" was No. 8 (right before illegally parked cars).

Priorities, people!
Posted by Grieve at 10:05 AM

Email ThisBlogThis!Share to TwitterShare to FacebookShare to Pinterest
Labels: decent housing at a resonable cost, quality of life, surveys