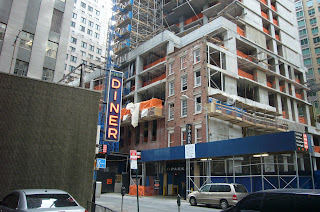 Outside my jurisdiction again! But I do work around the corner from this project at Maiden Lane and Pearl Street. So I have the pleasure to see this concrete hell inch skyward every week day. As Curbed as reported, the developers are such preservationists that they decided to make the old facade at 211 Pearl Street a permanent part of this gaudy insult to centuries past. As the City Room reported, 211 Pearl Street WAS a five-story counting house completed in 1832 for William Colgate, the founder of Colgate-Palmolive.

Anyway, as I understand it, the lovely old Pearl Street Diner -- with that classic neon sign -- will live on. It closed for a few days when the construction began at the Rockrose stinkpit late last fall.

I'll do more on the Greek diner later. Until then, if you're in the neighbor (lord knows why), please stop in....it's a rare gem (50-plus years) in a fast-changing neighborhood. With escalating rents and things like Subway and Chipotle (where you can get a week's worth of sodium in one meal!) open now around the corner on Maiden Lane, who knows how long Pearl will/can last.
Posted by Grieve at 10:04 PM