EV etc.: Bowery Electric opens, and the owners at least understand and appreciate the area's history 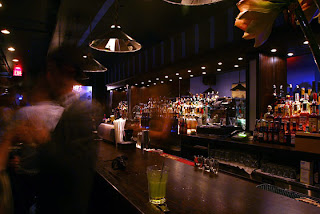 Grub Street ran this quote from the press release on the bar opening from Mike Stuto, also owner of HiFi:

“Being located adjacent to Joey Ramone Place and the former CBGB location we feel a sense of responsibility, especially as so much of that era of New York rock is gone.… We are looking forward more than backward, but a true respect of history is a key part of looking forward correctly.”

Maybe I'll swing by one of these days, though it looks a little nice and fancy for my tastes. And it's so close to Avalon Place, that soul-sucking eyesore that has taken over the neighborhood. Still. Perhaps BE will have an affordable happy hour. HiFi does a 2-1 till 8 p.m. that's nice (crowd depending, though you can almost say that about any place).

By the way, whatever happened to the ethereal duo Bowery Electric? Portishead killed that sound for many people, but I also thought this Manhattan-based duo was better than the rest.

Well, in their honor:

Email ThisBlogThis!Share to TwitterShare to FacebookShare to Pinterest
Labels: Bowery Electric, the Bowery, whatever happened to...