"If your establishment needs to hire a guy in an orange vest to direct traffic around your club every Friday and Saturday night..." 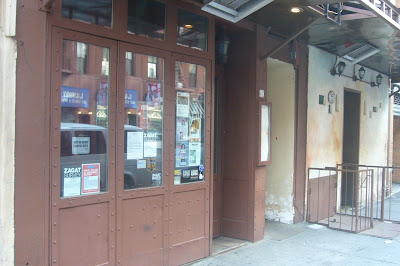 Crap, is it Thursday already? I meant to share this entertaining and informative reader comment earlier this week. Upon hearing the news last Friday that Le Souk had its liquor license reinstated and was planning on staying in the East Village (as reported first by DBTH), WB had the following to say:

One thing that need not be guesstimated is how much that place sucks.

Jokes aside, Le Souk did go before the Community Board in December. It was "following protocol" should this very thing happen. See here.

And so here we are. Hello.

Many spoke at that meeting. The tone was generally not positive as Le Souk went. It is true that some spoke up for the club, but a fair number of the pro Le Souk comments revolved around the tenuous idea that there exists no middle ground between circuses like Le Souk and the East Village of decades past (see reference 1). On the other hand the anti Le Souk crowd made consistently reasonable points. For example, if your establishment needs to hire a guy in an orange vest to direct traffic around your club every Friday and Saturday night, it's quite possible that your establishment has outgrown its environs.

Anyway, after everyone spoke their minds, the CB ruled that it would be inappropriate for it to make a decision at that time, since the license was suspended. It seemed like an odd decision at the time, given what was said and the place's history.

Now, I am not an attorney but I'm not certain that today's ruling means that Le Souk is on the fast track back to serving $24 Jägerbombs (reference 2). It sounds as if Le Souk needs to reapply for its license, which one would *guess* involves a recommendation yay or nay from the CB. And I can't fathom the CB giving it twelve thumbs up or whatever. The only thing Le Souk has going for it is that it has been closed for months and hence hasn't racked up more violations. But I don't fully understand how this machine works.

Anyway, if you ever have free time, the Community Board meetings are very interesting. It's a good look into one of the larger factors shaping our neighborhoods.