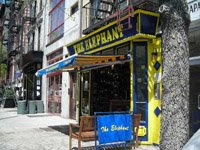 Wow. A doozy in The Villager this week. I'll link to it soon as it's online. Quickly, though! Last Thursday afternoon from 4-6, the good people at the Lower Eastside Girls Club were holding their annual free prom gown giveway at their HQ on First Street. As Lincoln Anderson reports, "hundreds of excited teenage girls lined up...in the process, blocking the way into The Elephant," the French/Thai bar/restaurant that doesn't exactly pack 'em in on a late Thursday afternoon. There were some words exchanged. And an Elephant manager threatened to call the cops. Lyn Pentecost, the executive director of the Girls Club, called the threat mindboggling. She lives on the block, and called the Elephant "a yuppie bar" and said that it "keeps the street awake all night every night." She claimed the manager got verbally abusive with the girls who were waiting for one of the 500 free prom dresses. The Elephant's GM, Eduardo Sontan, who was not in the restaurant at the time of the incident, told Anderson that they apologized to the the girls, but stressed the girls were blocking the entrance and the manager was worried someone might get injured by falling through the restaurant's sidewalk vault doors. He also said "I'm not against girls" and mentioned that Vice President Biden and Chelsea Clinton have recently dined there.
Posted by Grieve at 6:55 AM

Email ThisBlogThis!Share to TwitterShare to FacebookShare to Pinterest
Labels: First Street, hey kids get off my lawn, Lower East Side Girls Club, not biased or anything, The Elephant, WTF

holy crap. why are yuppie bar owners so insanely out of touch with reality and unable to relate to the rest of humanity?

And were the girls really keeping the masses from going inside the Elephant at 4? And shouldn't the Elephant have someone look at those sidewalk vault doors if they might collapse under the weight of some teenage girls?

...and girls who attend girls club and don't have the money for a prom dress could maybe be given a break.

if the line was full of sex & the city fans grappling for free cupcakes, would it be the same?

i read that this morning and couldn't believe it either. screw the Elephant and its dumbass manager.

Why is the age of the manager--and no one else--relevant? I hope I don't smell ageism, Grieve.

Good point, BaHa.... I picked it up from the article... No ages were given for anyone else. I removed it from the post....

at this point i don't think anyone is giving the elephant enough credit. i'm glad the les girls club does what it does - i know people that work there and i think the work is really important and awesome. i also don't really care one way or another about the elephant - i'm sure it is annoying to live near (as every restaurant/bar is regardless of clientele) and i'm also pretty sure that it's one of the less annoying restaurant/bars on that stretch of street.

however, a few things.

1. when i read "falling through the restaurant's sidewalk vault doors into the cellar" i assumed the doors were open. isn't it usually about 4pm when kitchens start bringing up needed supplies to do start cooking? just a thought....

2. the article states that the manager "only threatened to call the police after one of the Girls Club members - who was standing on a chair - spoke to him curtly." i immediately envisioned a scenario like this:

manager: "you shouldn't be standing on that chair. come down, you'll get hurt."
teenage girl: "dont tell me what i should do"
manager: "dont talk to me that way or i will call the police"

....at which point everything gets thrown out of proportion. of course, i wasn't there and obviously don't know what happened. i just think the "holy cripes, the elephant hates teenage girls" bandwagon is forming a bit too early. nevermind my opinion that the article was way more boring than i had expected: oh, two neighbors had a disagreement. woo! new thing in new york, really.

Just picking on girls. I've known the LESGC for many years. I know Lynn Pentecost to be an upstanding person. She respects the community and its vendors. She really loves her girls and she would never let them disrespect anyone. Every year prom dresses are given to young ladies, transforming them from underprivileged to princesses, giving them precious memories. One thing I know, the girls, at any event are not allowed to block doorway, passages, ramps, or sidewalk vault doors. Lynn would not allow anyone associated with the LESGC to hinder anyone from being able to conduct business. That’s not the way she does things. As for the apology on the behalf of Elephant; one of the employees of the establishment came out and started yelling and cursing at the girls. Perhaps that’s what the apology was for, or was it because the girls were really on an orderly line and everything was misinterpreted? The funny thing is, that weekend, the LESGC was broken into. I am not blaming anyone, nor do I represent the LESGC. I am just relaying my observation of the strings of events that happened. Let the finger-pointing and the bitterness go. Both groups can be an asset to each other and the community.

The guys who run The Elephant could care less about the community. That's why nobody who actually lives in the East Village eats there. I plan to walk by with my dog this afternoon and make sure he takes a nice long piss right in front of the place, preferably on that stupid bench they have outside.

The Elephant people got uptight about change in their environment too quickly. If they had just bit their tongues and waited, the girls would have gotten their dresses and left. There would be no incident to discuss.

The Girls Club is a good organization, and it attracts young people who care about the world and others. I have a difficult time believing the girls behaved like hoodlums.

the elephant room will go the way of the real elephant soon.

This is another example of yuppie carpetbagger arrogance. An appropriate response would be blocking the Elephant again, this time in the form of a picket, coupled with a boycott campaign.

Neighborhood activism and another year or two of deeper recession will hopefully rid us of these interlopers....