"No place stays the same for 15 years, certainly not in Manhattan" 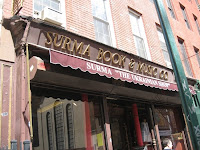 Jim Dwyer writes about Surma Books & Music on Seventh Street near Cooper Square in the Times today. An excerpt:

When Myron Surmach moved from shopkeeping to beekeeping in the 1950s, he turned the store over to his son, Myron Jr., who had a fine run as impresario of Ukrainian dances and parties and outfitting the flower children of the 1960s. Peasant blouses were in demand. Janis Joplin and Joan Baez and members of the Mamas and the Papas shopped in Surma Books & Music.

The grandson, Markina Surmach, whose first language was Ukrainian, lived above the store until he was 6. He left Little Ukraine and New York behind in 1991. “You want to define yourself, apart from the mold,” he said. “I chose to run away.” He started a Web-development business in Denver.

Surmach the beekeeper and store founder died in 1991, not quite 99 years old. His son died in 2003, at age 71. Markina has a sister, who was busy raising her children.

“If I didn’t come back, the store was going to close,” he said.

No place stays the same for 15 years, certainly not in Manhattan. With a few exceptions, Ukrainians have long since drained from the Lower East Side. So have the artists living cheaply. “The homogenization of city life is not unique to New York, or this country,” Mr. Surmach said. “It’s all over the world.”

Nice story. Didn't realized the place was as old as that.

Thanks for the link on this story Grieve, really warms my heart that Markian will be continuing the tradition of this store. So few of these Ukrainian stores still exist.

Thanks... And I liked how Dwyer tweaked the usual feature narrative...