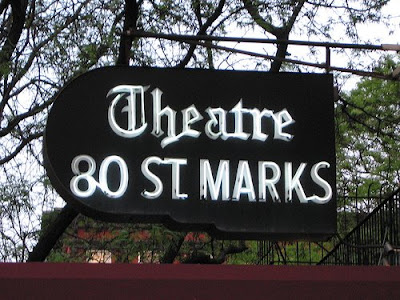 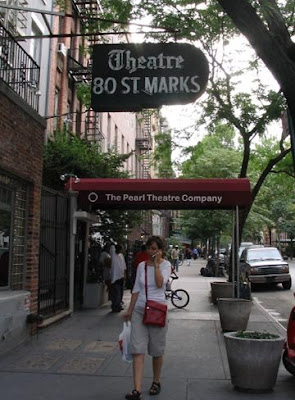 First the Amato Opera, now this...

The Pearl Theatre Company, which has had a residency at Theatre 80 on St. Mark's Place the past 15 years, is relocating to Midtown for its 2009-2010 season.

Said Founding Artistic Director Shepard Sobel in a statement: "While we are disappointed the East Village is losing a theatrical venue to commercial enterprise, we are thrilled to be moving to the theatre district to usher in this exciting new era of The Pearl in this vibrant new community."

And just what is that "commercial enterprise"? And what becomes of the Theatre 80? What will become of the celebrity footprints and handprints? 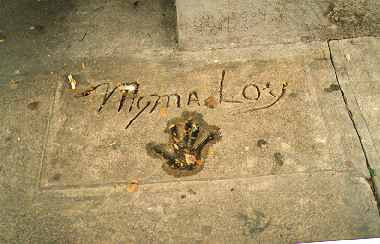 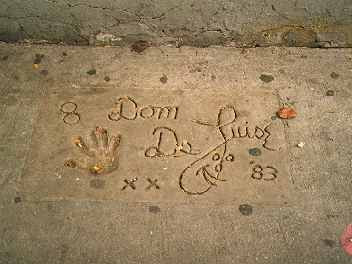 Why do we have the fear? Unfortunately, we don't know yet what's replacing the Pearl at 80 St. Mark's Place. We sent an e-mail to a Pearl spokesperson. According to the spokesperson, there are several different possibilities for the space at this time. However, the Pearl isn't privy to that information.

Anyway, here are a few more details about the Pearl's future. The New York City Center Stage II will serve as the new home. The Pearl will lease the space from Manhattan Theatre Club. The final Pearl offering at Theatre 80 is Tennessee Williams' "Vieux Carré," which runs through June 14.)

The new Pearl season will launch Oct. 2 with J.M. Synge's "The Playboy of the Western" World under the direction of the Pearl's new artistic director, J.R. Sullivan.

As for the Theatre 80, Howard Otway opened the space as a playhouse in 1967. He later turned it into a revival film house. He died at age 72 in April 1994. As the Times reported, Theatre 80 patrons assumed the venue would close. However, Otway's wife, Florence, continued running the theater.

In the 1960's, the Otways bought two five-story buildings at 78 and 80 St. Marks Place, site of a famous speakeasy during Prohibition . . . Mrs. Otway remembers the heyday of revivals, from 1975 to 1985, "when people lined up down to Second Avenue." Even in later years, as other revival houses failed, the business was profitable, she said. With a mailing list of 4,000, Mrs. Otway is not worried about competition from VCR's.

Mrs. Otway also lived in an apartment above the theatre. Unfortunately, her tenure was brief. The theatre showed its last double bill -- "High Noon" and "Shane" on July 21, 1994. The Pearl's first production, "King Lear," began on Sept. 8.

For further reading:
Plays to Replace Films at Theatre 80 (The New York Times)

Theatre 80 sign via Warsze on Flickr.
Theatre 80 sidewalk art via Forgotten New York.
Posted by Grieve at 7:00 AM

this is big, upsetting news. wish they could bring back those fantastic double features. god knows what crap they'll put in there now.

That's a shame. Saw a lot of good plays in that theater. If only Pearl theater were offering ramen, froyos, and cupcakes in their concession stand, maybe it'd still be there.
Oh shit, I just gave the landlord new ideas to what will become of that place.

Yeah, I was remembering some of the great double features that I saw there before the Pearl took over....

I also saw some fine plays too...

Should I be hopeful that something the neighborhood wants/needs will take over the space?

Bad news. But maybe it will become a movie theatre again. More likely, though, a bar.

This is big news...sad as well. I too remember seeing some cool double features when they still had movies, as well as great theater when the Pearl moved in.

Thanks for the comments... I'm with Esquared. Given the state of St. Mark's these days, you'd have to think it will become another ramen joint.

I was introduced to the Thin Man series of films there back in 1988, featuring Myrna Loy. Every time I walked by, I wondered how long it would last......

I love the Thin Man movies...

I used to live above the Otways at 80 St Marks back in the 80s. They were the nicest landlords I ever had, instead of a rent increase when my lease ran out December 31st, they gave us a bottle of champagne and left the rent alone. Howard used to let us up on the roof to watch the July 4th fireworks. And Florence was a shoe designer for Calvin Klein and used to bring home samples for my wife.

Thanks for the comment, anon. She still owns the buildings... She sounds like a very cool person... perhaps she's selling/leasing the space to something equally noble....

best double features ever seen there:

it does not get better than that.

I remember seeing a Roman Polanski double feature there — Repulsion and Frantic (which I will lukewarmly defend).

Anyway, about a foot of snow had fallen while I was in the theater.

Was it the first big snowfall of the season? I don't know. There was a buzz in the air...

Odd, I used to work for MTC, and I'm fairly certain City Center will be closing for remodeling for the entire duration of the '10-'11 season.

My wife & I were told by a friend, who is a performing member of the Pearl, that they're renting the City enter for one year (or season, I guess), and then they'll have to find a new spot.

Thank you for the kind comments, from past audience members and a former tenant. We dearly loved all the tenants who rented from us, including the Pearl. Be assured that the Otway family still owns and runs Theater 80. My mother is well and sends her dearest regards to all.
When we came to Saint Marks Place in 1964, there was not a tree on the block. My father planted the first three trees on this now tree lined promenade. At the age of eleven, I dug out the auditorium with my father and helped pour the concrete. We are not going anywhere. We helped to build this neighborhood one business at a time, and it can be lost one building at a time. We have held out against times when those who are tearing down the neighborhood seem to be winning. But, like many others, we intend to keep the East Village a vibrant arts community.

I am at a loss to understand the quote from Shepard Sobel that he is “… disappointed the East Village is losing a theatrical venue to commercial enterprise..." Theatre 80 has been the jewel of the off-broadway theaters since my father built it, and we opened in the mid 1960s.

Our theater saw the opening of "You’re a Good Man Charlie Brown", was the home of the Manhattan Festival Ballet, and was the first full time film revival house. For many years Noche Flamenca has performed to sold out audiences.

I have no idea the meaning or source of this information. As managing agent for the Otway family, owners of Theatre 80, I state categorically, we intend to remain a theater. We have turned down offers for other uses of this theater which would destroy the auditorium.

Please be assured that we welcome offers from theater companies to lease this theater. I can be reached by email at LorcanOtway@Gmail.com

Hi Lorcan,
Many thanks for the lovely note. I appreciate all that your family has done for the neighborhood. I'm happy to hear that Theatre 80 will remain a theater. Given what has happened elsewhere in the neighborhood in recent years, it's easy to start thinking the worst. All the best to you and your family.

EXCUSE ME? I am a subscriber to the Pearl, and they send me periodic letters by mail and email about their season, changes in staff, fundraising, christmas cards etc. I just sent in my payment for next season which they reduced from 5 plays to 4, but nary a mention made about moving. I have to hear about it through a blog?! I love you Mr. Grieve, but this isn't how I want to hear about this. It's like your friend breaking up with you on behalf of your boyfriend, totally unacceptable.

I must go now to find more outlets to rant further... thanks for the news.

How long ago did they send you the information about next season, Jill? I'm curious how long the Pearl has known about the move. The press release was issued Tuesday. Aside from quality plays, many people go to the Pearl specifically because it's in the neighborhood... Nothing against the Midtown venues, but it's nice to simply walk a few blocks from home to the theater...

I got the solicitation mailing for the next season about a month ago, and I literally sent in my check last weekend. That they didn't send out an email to announce the change to subscribers is kind of unconscionable.

Walking to the theater was absolutely one of the nicest parts. We subscribe on Thursdays and I really don't want to go uptown on a Thursday night. I am considering canceling. I'll decide after this week after we go to Vieux Carre this Thursday.

There are theaters on East 4th Street that offer great things, and I may look into to one of them. The one that I was looking at was much more expensive though, and one of the lovely things about The Pearl was how affordable it is.

Also, something to note, I've yet to see a positive review for any of the plays they've put on this season. While I have enjoyed them, the critics certainly do not.

It also was a jazz space back in the day: the Jazz Gallery, run by the Termini brothers, who also operated the Five Spot. John Coltrane did an extended residency there, among others.

hmm an old thread. Larry (Lorcan) I went to school with you, before the warpipes ever drew breath i would say.

My dad was a great fan of the Pearl. Though he passed away last May.

Would like to ask you one or two things if you can contact me at iamourhaj@aol.com or ask roberta newman about paul c cheers