Is the wrecking ball in store for the Cooper Union Engineering Building? 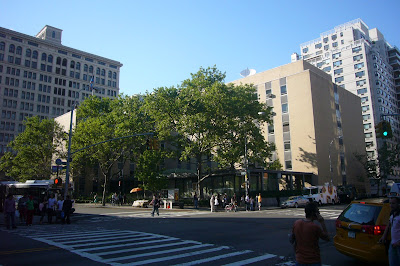 In this week's issue of The Villager (not yet online), Scoopy addresses the hot neighborhood rumor: Will the Cooper Union Engineering Building on Astor Place be demolished, like, really soon? The Starbucks there is gone, of course. Continental owner Trigger told Scoopy that he heard the building was coming down next month. (By the way, Trigger said that he favors a Whole Foods or Trader Joe's coming to the space...Not sure if he was serious.) Edward J. Minskoff Equities has the long-term lease on the building. Minskoff CFO Ben McGrath told Scoopy: "We are not commencing demolition next month -- that's a certainty. Cooper Union is still in the building. ... Obviously, the economy has an impact on the decision, but we're still wrestling what to do and when to do it."

Scoopy also mentions that the school will have moved into Cooper Union's new academic building at 41 Cooper Square by the summer. The ribbon-cutting ceremony at the new building is Sept. 15."
Posted by Grieve at 6:54 AM

Bring back the Bible House!