"Avenue A will never be the same" 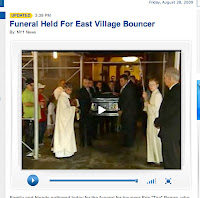 NY1 filed the following report this afternoon after the funeral of Eric "Taz" Pagan:

Church volunteer Mike Rodriguez, the cook at Forbidden City, said he heard the shot that killed his friend.

"Sometimes we played cards, or we drank, just to relax," said Mike Rodriguez. "Just a split second, that's it. Life is too short."

Those who came to the funeral at Immaculate Conception Church on 14th Street, where Pagan was baptized as an infant, remembered the late bouncer as a warm-hearted man.

"I come from Florida to pay my respects for my brother, a great guy," said friend German Fernandez.

"He's such a nice guy. We always had a good laugh to come in with," said bar customer Michael Cruz. "I remember him fixing the ceiling once, just completely taking it apart more than he needed to do. It was the funniest thing to watch him do. He had some much energy coming in and out of that place."

"Taz was always the protector. I used to work at the bar next door to where he used to work and he was always there if we needed him," said bartender Laurie Beck. "We used to hang out for years, I knew him since I was about 17 years old. It's been about 10 years and there was always so much love. Like a big brother to me, you know? Anytime anybody ever needed him, Taz was there. He's such a wonderful guy and he's so missed. Avenue A will never be the same. You walk down the block and expect to see him."

Perhaps the biggest endorsement of how loved Pagan was came from the victim's own parish priest.

"He always maintained optimism in his life," said the Reverend Joy Mampilly. "Also, he tried to instill a warm feeling into the lives of people who came around him. You don't have to be a friend to know him well."