Reminder tonight: Rally for homeless outside the Christodora 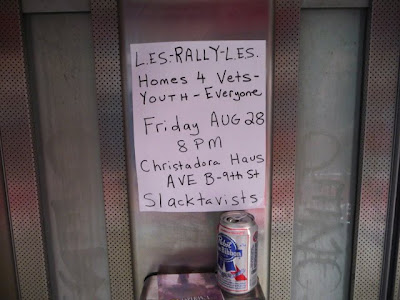 Scoopy has more in this week's issue of The Villager:

“We’re going to ask Michael Rosen to adopt us — me, Jim Power and Biker Billy,” L.E.S. Slacktivist leader John Penley explained. Penley said he hasn’t actually read Rosen’s new book, “What Else but Home: Seven Boys and an American Journey Between the Projects and the Penthouse,” in which Rosen recounts the story of how he and his wife opened their home to a group of local youths. “I heard reports. People said it’s not bad,” Penley said of the book. “We’d like to move into the penthouse, too — if he wants three new sons... . We’re not all that young!” Penley added that the camp-out concept is being well received: “A lot of people expressed gratitude that somebody’s doing something that’s a little radical this summer,” he said.

For further reading:
"Mosaic Man" and the "Slacktivist" Promise New Tent City for the Homeless ... (Neither More Nor Less)

Long, hot summer at the Christodora (Curbed)
Posted by Grieve at 7:34 AM

nice touch with the PBR can.