What's going on with the playground at Mary Help of Christians?

There was a fund-raiser for Mary Help of Christians outside the church on 12th Street near Avenue A this past Sunday. 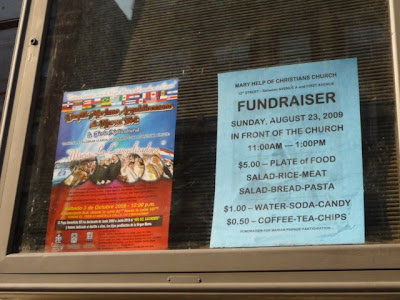 There are still two masses here on Sunday mornings.

Anyway, seeing this fund-raising sign made me wonder.... Whatever happened to the sale of the former school's playground? 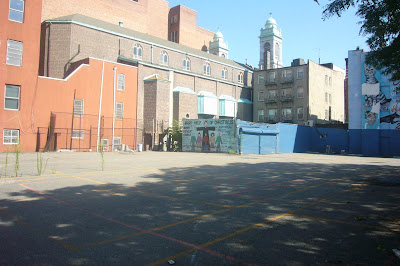 It has been nearly a year since The Real Deal reported the following:

Two thirds of a 15,000-square-foot East Village playground that was home to a popular flea market is under contract in a quiet, all-cash sale for $10.4 million to the Archdiocese of New York, court documents said.

The playground, divided into three ownership lots, is adjacent to the shuttered Mary Help of Christians Catholic Church on the east side of Avenue A between 11th and 12th streets. The Archdiocese owns the church located on a 13,000 square foot lot, city records show.

The two parcels, under contract since July, total 7,500 square feet and are owned by a Roman Catholic order called the Salesian Society, based in New Rochelle, NY. The third part of the playground, totaling 7,500 square feet, is owned by the Archdiocese, records show.

The Archdiocese did not respond to requests for comment, but real estate professionals speculated the church parcel and playground would be sold and developed into residential housing.

The only thing growing here now are weeds. Which is fine by me. Couldn't this space be turned over for community use? Do we really need another condo or dorm? 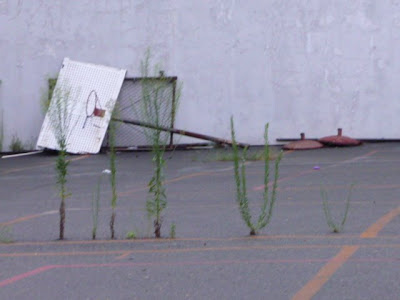 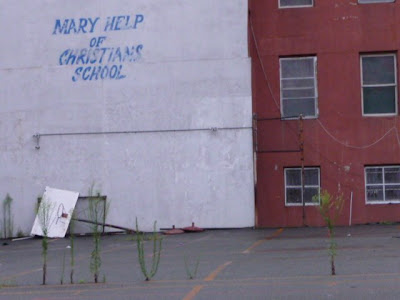 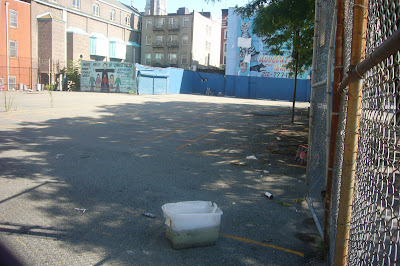 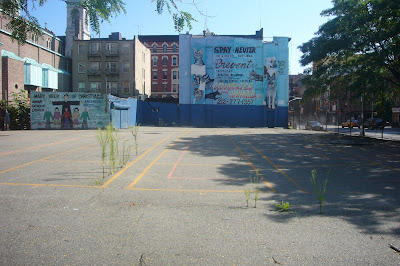 The Mary Help of Christians market vendors relocated last fall to the playground behind Earth School, Thompson Square Middle School and P.S. 64 on Fourth Street between Avenue B and Avenue C. I believe the flea market is done for the summer, though...

Bob Arihood has posts on the faithful souls who come to the church steps every night to say the rosary. Here.... and here. (The third photo in this post is one of my all-time favorites...)

The Church Ladies (The New York Times)
Posted by Grieve at 7:15 AM

I believe there will be construction on East 4th Street and The Flea Market will close the end of the summer. It would be great if they could get their former space back on East 11th Street.The Flea Market is cool and they really give something to the Community. I have purchased many great things there and have posted some photos of The Flea on my blog from time to time.

that bucket of mystery liquid in pic #3 is frightening.

Nice work Grieve, I passed this lot just a few nights ago and was wondering what fate might befall it. Sadly, the condo option seemed the most likely.

Thanks, HG. I guess we should enjoy the empty space while we can....

There has been a sign hanging on the Avenue A side of the fence, close to the building with the pet mural, since last fall. The sign is for the MTB Group LLC.

I looked the company up online last year but didn't find anything that looked relevant. Since there has been work done on the buildings between the empty lot and 12th street, it's hard to tell what it means. But it's still there if you want to check it out.

Isn't it the Tompkins Square Middle School? (not Thompons)

Yeah, you may be right RBB... I've lost track of what that complex is going by these days.

Yeah, Pretty sure it's Tompkins, unless they changed it since I went there. Which I guess they might have.

Any update about this?