The Village Pourhouse turns three (though it feels longer)

On Sunday, the Village Pourhouse at Third Avenue and 11th Street celebrated its third anniversary... 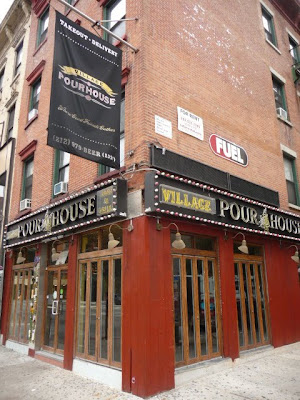 ...and on this occasion, VP introduced its new Take Out Window... (The window has been there for some time, though apparently was never put to use... ) 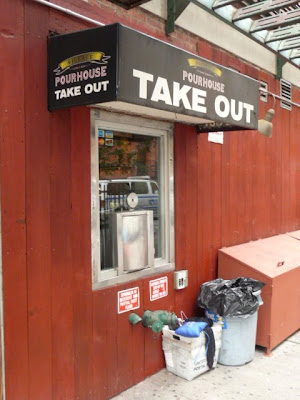 Never been to the place myself. So I went to Yelp to find out what the people think. A sampling of various reviews...

Yes, it's right next to the NYU dorms, so there's bound to be trashiness and other obnox-auchery going on.

Sure, the food and cheap beer will attract ditzy, but hot, girls and ditzy, fratty guys, all of whom at one point of the evening will be spilling drinks on you, stepping on you, or crotch spooning you or all of the above.

Whatever. (I, of all people, can appreciate any or all of these things.)

But really. Really? This place attracts the douchiest crowd ever.

That's the bottom line. It's not really about the place, or the set up, or anything like that. It's merely the fact that for some reason, 90% of the people who spend a majority of their night here, end up being really irritating, obnoxious, trashy drunks.

And honey, it's okay to be drunk and messy and sometimes funny - even when you're not trying to be --

But for goodness sake, this isn't Hoboken. Now stop crying about how your boyfriend doesn't love you and get away from this congregation of douchebags.

Strange but pretty girl walks up to me...moves her scarf, insists i look at her chest and asks if I like Kansas...

she is making her breasts jump up and down and I realize she is wearing a Jay Hawks shirt. I hardly notice cause all I see are breasts...I don't lie...I say, I didnt even know who the jay hawks were until just now but from what i see i'd gladly learn more about them...she starts talking...i hear womp womp womp, womp womp womp, womp womp womp womp...not in that order. I come out of my fog and realize, she is still talking...and i remember some of the womps as south dakota then kansas then dc then New York. Then she excuses herself to go talk to her friend...yay.

Friendly staff, lots of tv's showcasing a variety of sports, three large rooms, great owners, great beer selection, food is simple but executed well. This is a sports bar and it accomplishes its goal.

Atmosphere is a bit on the popped collar side but it's a sports bar, so the whole goal is to attract sports fans, and if you don't like watching sports, then don't go to a sports bar, which you will notice because of the trail of polo shirts that lead you through the door :)

I really dont understand why a place would sponser a event that has the people leave your place to go drink somewhere else, and to do something that brings bad press, like a out of control college frat thing. - BL