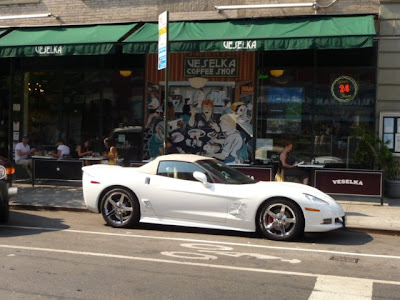 TGIF to Union Square fallout. Per an Eater commenter: "I am going to run a $1 shuttle bus between TGI Friday's and Superdive starting at 8pm on Thursdays and Fridays" (Eater)

There will be none of that "discharge of fecal matter" business in this pool! (Curbed)

Jack Shafer debunks the summer's big "trends" stories. Like beer guts on hipsters! "Usually when something is called hip, a top hipster can be found embracing it. But Trebay names no leader of potbelly hipness and uncovers no evidence of hip potbellies in the cinema, the stage, the concert hall, the night club, or elsewhere. It's just these random guts strolling around New York. You might as well say argyle socks are hip." (Slate)

Phil Mushnick: "Every time I hear/read a team or MLB exec rationalize ticket prices as in-line with Broadway show tickets I want to retch. How many Broadway shows have two-hour rain delays? How many matinees are switched to Sunday nights? On Broadway a losing streak closes the show. How many shows would survive if the cast were shut out, 12-0, the script re-written every day and the stars intentionally walked?" (New York Post)

And over at the New York Nobody Sings, Cheetah Chrome gives a guitar lesson:

that eater commenter is brian van, the very same douchebag who's asking calling the east villagers outcasts and to move away. just shows how much of an arrogant but coward of an asshole he is