The Mosaic Man is back on the trail... now with an apprentice 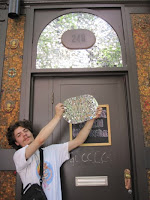 There's a nice piece in the Voice now by Leslie Minora, who files a feature on Jim Power.... Power is in the process of refurbishing his mosaics... and! He has apparently found an apprentice. An excerpt:

Power has also teamed up with Al Bonsignore, a 23-year-old apprentice/patron, to carry on his mission. Two months ago, the older man was walking along First Avenue when Bonsignore recognized his mosaic cane and approached him. Bonsignore, a native New Yorker who has admired the posts since childhood, hit it off with the artist, and the two began an unlikely but serendipitous working relationship. "Yeah, he's hooked; he's done; he's finished. That's it -- Mosaic Man," Power says, jokingly bequeathing his nickname to his protégé.

A month after meeting Power, Bonsignore invited him to work out of the basement of the East 5th Street building owned by his father, John Bonsignore, who runs a plumbing business in Murray Hill and co-owns West Village Bar Little Branch with Milk & Honey mixologist, Sasha Petraske. In return, Power is teaching his craft to Bonsignore, who helps manage the East 5th Street building, and the two are developing plans for future projects and ventures that grow loftier and more intricate by the day.

"It's great for me," says Bonsignore. "It just feels right. It's a great de-stressor; it's a great way to be creative, and it's just fun." (Bonsignore also grows medical marijuana in California.) "Growing and mosaics have been my two main focuses right now -- and music," he says.

[Photo of Al Bonsignore via The Voice]
Posted by Grieve at 12:23 PM

wow, that is so great! Al Bonsignore is New Yorker of the week. Good for you mosaic man!!!

Cool...I've seen them working outside the barber shop the last few weeks and wondered what they were up to. Good news.

nice to see the passing of the torch.