A New Yorker of the week 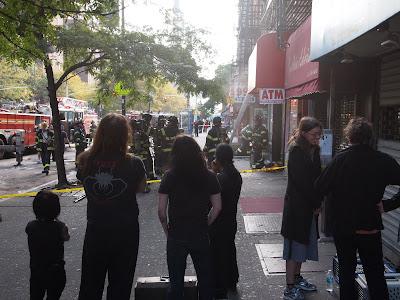 While reporting on the fire at Otto's Shrunken Head on Sunday morning, one witness said that "an alert super" made sure that all the tenants in the apartments above the bar on 14th Street were informed of the blaze.

Per a building resident:

it was not an 'alert super.' in fact our super didn't show up for hours despite numerous police calls. it was in fact a random passerby with a shopping cart who buzzed each unit 3-4 times, woke us all up, and alerted us that 'your building is on fire. get out of the building now!' when thanking him later his response was 'any new yorker would have done the same.' not sure i agree. I am still trying to find out who he is. I believe in credit where it's due.

i am so sorry to hear about the fire at ottos! i fre@kin LOVE that place and go there all the time! glad n oone was hurt and am looking forward to coming this weekend to support them. Long Live Ottos!