As reported yesterday, police are stepping up their efforts here to thwart a rash of crimes by pre-teens and teens in and around Tompkins Square Park.... Last night around 8:45, Bob Arihood passed along word (and these photos) that police made a show of force in arresting a young man who allegedly stole a cell phone. 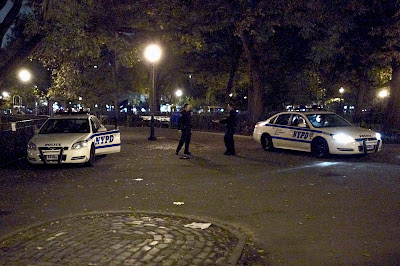 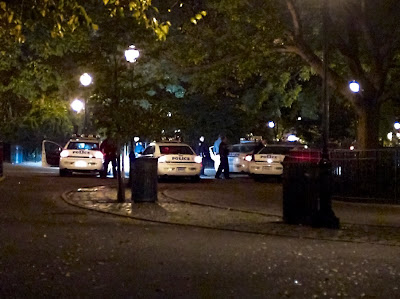 According to witnesses, the alleged thief in police custody appeared to to be young and crying. A witness recounted that the youth said something like "but I gave the cell phone back." In addition, witnesses noted that the youth was seen being chased by two other males into the Park from St. Marks Place and that the police were down on all this in numbers right away.

Previously on EV Grieve:
NYPD establishes mobile command center on Avenue A
Posted by Grieve at 6:59 AM

I love how he cried when he was caught. Poor, poor bully!

He should have just claimed he was trying to take the neighborhood back from the bankers and NYU.

I appreciate the police being a visible presence and cracking down on crime in the park.

Kurt that was funny and he probably should have said that. Actually believe it or not I am glad they caught him. I still think we need to help neighborhood kids who are in trouble because sending them to upstate prisons only makes them worse and more dangerous. Kurt at the risk of causing you EV Grieve admirers to turn on you I like your comments better than most of the others because I appreciate a sense of humour and you have one.

I happened to see this too. I heard that the kid is 17 years old and to me he looked like a skateboarder, with his long hair and stylin' clothes. I wonder if his capture had anything to do with that new van parked outside the park. Anybody know?

I think all the victims should be put in a room with him and allowed to "put the boots to him"
medium style.

Jill the van from Burough Patrol Manhattan south was a mobile command post . the van was at that corner for 3 nights administering the several MSTF officers assigned to the special task of assisting the 9th precinct in reducing street crime in the area along Avenue A and in TSP.

Its likely that the 9th precinct's rapid and overwhelming response to this theft last night is due to special attention to organizating units to attack this kind of crime . similar organization of units has occured to deal with the increased number of burglaries .

Whats made a difference is Chief of Department Esposito's special attention to preventing this kind of crime ....and of course the article in the NY Post .

I am glad they caught him now while he is young. Maybe he'll smarten up and realize robbing people isn't going to get you anywhere.

Penley, I didnt notice in any of your postings that you actually had a sense of humor. Oh foolish me for not 'getting' it.

Ugh!!!! Again with the cops in TSP?! These yuppie scum can't take care of themselves! And JUST when we were getting back to the good old days when there was more crime.

I agree that it's good that they were able to catch him while he is still young. Hopefully he will be able learn his lesson and turn his life around.