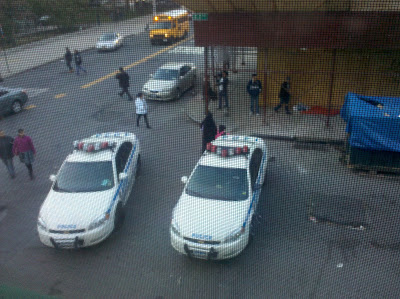 Following up on the previous post about police presence on Seventh Street... DNAinfo has the disturbing report:

An unidentified man was found dead with a stab wound to his neck in front of an East Village apartment building early Monday morning, police said.

The body of the 21-year-old man was discovered by police outside of 272 E. Seventh Street.

East Village neighbor Charles Smith, 41, was out getting his morning coffee around 5:30 a.m. when he saw the man stumbling out of the building.

"I thought he was drunk until I saw the blood," said Smith. "It's shocking to see someone die."

Smith said police arrived on the scene just minutes after the man collapsed onto the sidewalk.

Police arrested another man in connection with the crime, but they have not released his name. Officials have closed Seventh Street between avenues C and D while they investigate.