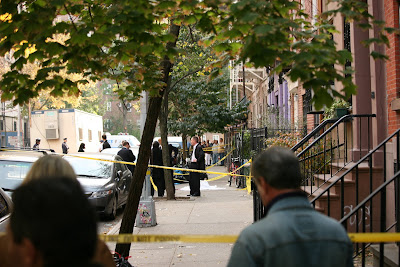 More details are emerging about the murder yesterday morning on Seventh Street. Neighbors found Christopher Jusko, 21, outside 272 Seventh St., with stab wounds on his neck.

According to the Daily News: "Police arrested Jairo Pastoressa, 25, after he walked into the 9th Precinct with the murder weapon and admitted to the killing. The two men apparently got into a fight over a woman and money, sources said."

Mr. Juska, who had no known address, was able to flee but collapsed in front of the building where he was later pronounced dead by emergency medical technicians, police said.

The official said Mr. Pastoressa later turned himself into the Ninth Precinct. He told police he only stabbed the victim after Mr. Juska brandished a gun, the official said, but no gun was found at the scene. Mr. Pastoressa has been featured in online videos where he crafts graffiti murals.

By the way, Pastoressa might be better known as Link6.

Neighbors described Pastoressa as a passive, good-natured person and expressed shock when hearing about the brutal incident.

"For Jairo to do something like this is crazy," said third-floor resident John Bonilla, 59, who saw a bloody trail on the staircase from the second floor down to the hallway of the first floor. "He was laid back."

Ramos and others echoed Bonilla's statements that Pastoressa was not a troublemaker.

Another neighbor said Pastoressa was "well liked" and a "social butterfly," but that he had been picked on in the past and had his apartment broken into last year.

Pastoressa grew up in the apartment building and knew many of people in the neighborhood, said Lyn Pentecost, executive director of the Lower Eastside Girls Club, whose son went to daycare with Pastoressa.

"He's not the kind of guy to be violent if unprovoked," she added.