Twice now plans for 14-16 Avenue B were shot down by CB3 (and, perhaps, for good reasons — one venture called for a 3,000 square foot Italian restaurant, catering company and lounge "with an occasional D.J.") ... first in February ... and later in September.

Now, someone else has a chance to give the space a whirl... the storefronts are back on the market. 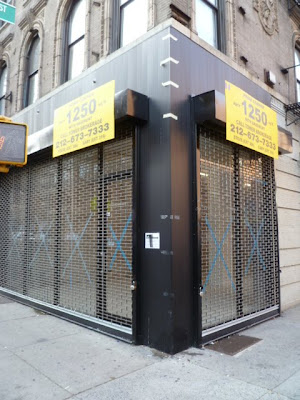 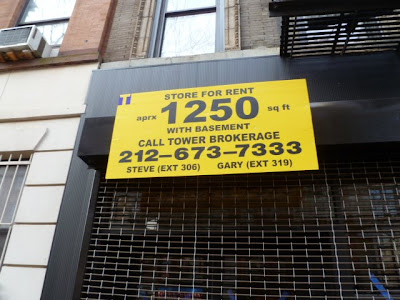 Folks at Tower may want to update the listing too... 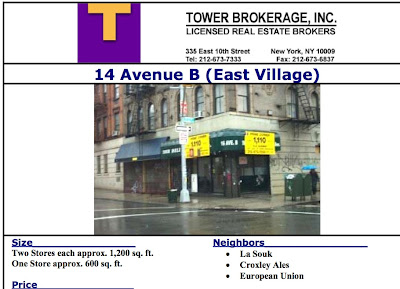 Previously.
Posted by Grieve at 6:52 AM

Email ThisBlogThis!Share to TwitterShare to FacebookShare to Pinterest
Labels: 14-16 Avenue B, empty storefronts

By the way this building is owned by Westbrook Associates who are sleazy, predatory real estate developers who bought 17 buildings in the East Village. They have succeeded in pushing most rent stabilized tenants out with threats and harassment.  All seventeen buildings are managed by Magnum Management which is run by the notorious developer Ben Shaoul who also owns the A Building. They like to bring in big monstrosities in the commercial spaces because it helps to push out long time tenants while destroying the neighborhood.
Some other Westbrook/Magnum buildings are 165/167 Avenue A. 167 Avenue A is the home of Diablo Royale Este. Only three original tenants between the two buildings survived according to residents. Directly across the street is another Westbrook/Magum building at 500 East 11th Street. Bar On A has destroyed the quality of life for the people who live in the building above it.
These are just a few examples.

This is just my own fantasy, but it would be great to see this space open as a 3000 sf bookstore with an area for readings and/or talks like the Tenement Museum hosts. A small coffee/cafe area would make it even better. If a place like this opened, I'm sure it would be popular in a good way.

211 Avenue A is another one of the Westbrook buildings managed by Magnum. That building has three bars. Phoenix, Destination and Drop Off Service. The A building is right up the block. Shaoul is the king when it comes to ridding people from their apartments.
I would love to see a bookstore with a cafe at 14-16 Avenue B, but these are bad operators. Hopefully the Community Board and the SLA will not support another liquor license on South Avenue B, and what is up with the building across the street from this space. Are those lofts? Is anything planned for their ground floor. Does anyone know?

I love you idea, Goggla. Sad that somethng like this has to be a fantasy here.

@Goggla, EV and Melanie... it's beyond words for me, but that is just not our neighborhood anymore.

Bookstores, coffee, reading... that's our old EV. sadly, i do believe that it's gone from this 'hood permanently (or at least a generation). there *are* other neighborhoods -- probably (gasp) in brooklyn (or portland!) -- that have that sort of space & vibe, but sadly, that is not our EV anymore.

after being here 25+ years here, i'm thinking of moving. seriously. this past week has been just way too much.

Yeah tell me about it. I would just hate to live in a vibrant neighborhood with good restaurants. I'm so glad you are all looking out for me and making sure that I don't.

if you want a bookstore / cafe...then open one up. stop complaining that others dont do it for you and do it yourself.