East Third Street resident Frank Franca passes along word of a lovely creature that has taken up residency in his building... A red-tailed hawk moved into the airshaft of his building right after the blizzard. "It makes a tremendous whoosh when it flies from one floor to the other," he says. Frank shared these photos... 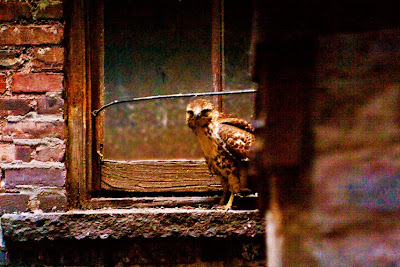 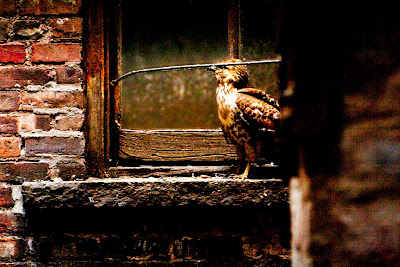 Frank notes that his building had a horrible pigeon infestation for years that was out of control. "They were noisy and filthy, and kept everyone awake at night," he says. "Since this creature arrived, not a single pigeon has been seen on our entire block."
Posted by Grieve at 7:00 AM

I hope he names that hawk "DeNiro" or "Travis" because that hawk is clearly saying "You lookin at me?!! Huh? You lookin at ME??!?!?"in that first photo. LOL!

That's dope yo, pigeons between buildings are messy/annoying as fuck.

I WISH THE HAWK WOULD COME OVER TO THE BOWERY NORTH OF DELANCEY! THE PIGEONS ARE TOTALLY OUT OF CONTROL, DUE MAINLY TO A DISGUSTING BREAD MIX PLACED ON THE PAVEMENT. WE HAVE TRIED ALL OTHER SOLUTIONS.
----------m

@ ---m, someone is definitely dumping crusts and seed beneath the scaffolding at the southeast corner as well.

Whoa, great pics, I have a pair of pigeons in the air shaft by me, they look shifty, definitely plotting something!

So then maybe instead of those useless plastic owls some buildings put on their roofs to keep pigeons away, someone needs to start manufacturing wicked-looking plastic red-tailed hawks instead?

Damn those pigeons and their all night sex parties. Gross.

beautiful bird, and a wonderful shot of his outer building. Just gorgeous all those reds and browns....wow, he oughtta leave a recorder out there to capture the sounds of wooooosh

Damn Google Image Search. I think I was mistaken and that yes, it is indeed a Red Tail Hawk, not Cooper's. Apologies.
-H

I have been trying to beckon a hawk to my windowsill for years. Sigh.

these photos are gorgeous! those colors...

Sometimes, I just want to smack the asswipes that throw food to the pigeons and squirrels (and rats). They have enough garbage to eat. We don't need to give them more sources of food.

What I wouldn't give to have that bad boy perch outside my building on E 5th Street b/w 1st and 2nd. Pigeons are filthy. We had two hatchlings outside our window last week. One died and the mother and other chick just kind of hung out with the carcass. They've gone and now we're fending off another pair! Boxes of moth balls have been deployed and we're hoping for the best!